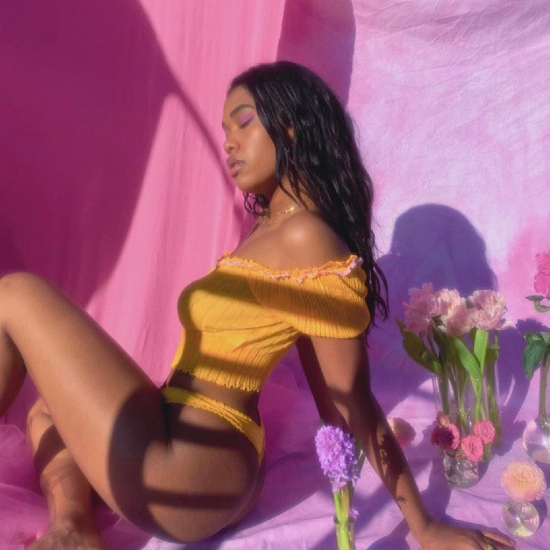 In 1999, Dru Hill’s Sisqo went solo with his debut album, Unleash The Dragon. What he really unleashed upon the world, however, was the “Thong Song.” The unexpected hit ruled the charts and dance floors for a whole summer (and well beyond). The song has a legacy for as a not-so-guilty pleasure for fans young and old. One of those fans is none other than Amber Mark who decided to put her own spin on the hit single for her COVERED-19 series while trying to chase away her coronavirus quarantine blues.

Amber’s take on the “Thong Song” production-wise is very different from the infectious R&B pop sound tune crafted by Tim & Bob. While the basic groove remains the same, Mark takes the sound into a moodier direction, creating a song that is both smoothed out and has enough thump to make her shake her groove thing. After a cool and calm intro that showcases her vocals, she increases the tempo and incorporates some musical elements from Middle Eastern music in a surprising plot twist that actually works.

With a cover of the “Thong Song,” it’s only right that Amber also delivered a video to go along with the track. But don’t expect to see Amber pulling out her Megan Thee Stallion knees to drop it low. While she does give us a little body rolling and tasteful hints of her thongs, the video just showcases Amber having fun, dancing to the beat of her own drum literally. The DIY clip was shot at a lake house on an iPhone by Mark’s little sister. The homemade quarantine-style clip is fun, artsy and carefree, much like Mark’s whole vibe for the COVERED-19 project.

The “Thong Song” is the final release from Amber Mark’s COVERED-19 series, a collection of original demos and covers. Other songs from the COVERED-19 series included remakes of Eddie Kendricks’ “My People” and “Heart-Shaped Box” by Nirvana. For Mark, making music was one of the only positive things to come out of the coronavirus pandemic.

“All the pressure I normally feel when working on music is lifted,” said the singer. “It’s just me whipping up whatever I’m feeling. Keeping it minimal has been the key mentality for me and just having fun with it. I used to stress so much about visuals and the message I was sending with my music. I’ve learned a lot about myself already during the quarantine. And hope to keep this mentality going when all of this is finally over."

Bravo to Amber Mark for stepping outside of her comfort zone and dropping some dope covers and unexpected jams like this one along the way. We hate to see her COVERED-19 series go, but she can put it to bed knowing she completed a job well done.