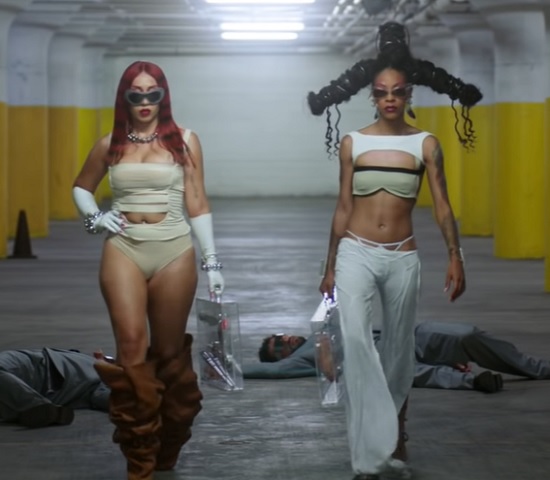 Kali Uchis shows no signs of slowing down. The singer blessed us with her debut album Isolation back in 2018 and has been popping up everywhere since. Just this year alone she's brought us her EP To Feel Alive, and she's already planning to release her as-yet-untitled sophomore set later this year. The project, which will be her first Spanish language album, gets its introduction with the commanding single and video "Aquí Yo Mando," a girl-power anthem that also features Rico Nasty.

We here at SoulBounce unfortunately aren't fluent in español, so we can't tell you exactly what's being said. We can tell you through context clues, however, that the ladies are embracing their power and letting men know they're in control. Over a bass-packed beat that will make your speakers shake and hum, Kali lays down the law in Spanish while throwing a bit of English in the mix to let you know she's one of one. "No, no, she can't do it like me / Throw it down, wishin' you could see the look upon your face," she sings at one point. Rico, meanwhile, lets it be known that she can be classy, nasty, handle business and be in control all at the same damn time.

They take their boss b***h mentality to the screen in the Philippa Price-directed video, which shows the ladies stomping the halls of a shady-looking facility and showing the fellas who the real bosses are. The men in the video — who are literal pigs here — are shown no mercy by the duo of femmes fatales who kick ass and take souvenirs from the men for their troubles. The concept is, admittedly, a bit out there, but the ladies sell it well and look damn good while doing it.

"To my fans & new listeners; I pray this song makes you feel tasty & powerful, thank you!" Kali said in a press release. We definitely feel the vibes here at SBHQ. Get into the video for "Aquí Yo Mando" below and keep your eyes glued here for more news on when we expect the latest album from Kali Uchis.