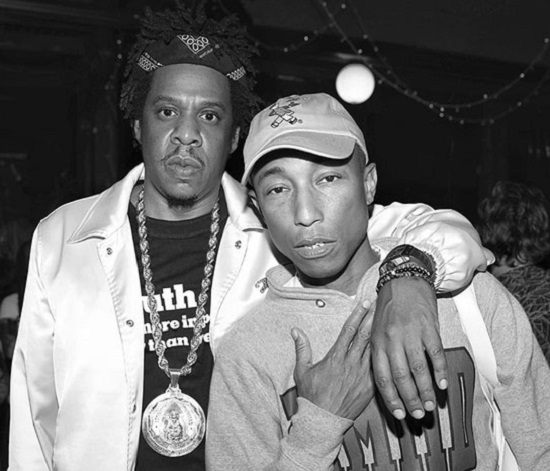 If there are two people in the music business who are about their money, they would definitely be Pharrell Williams and JAY-Z. The two are not only frequent collaborators, they also have well-established brands and investments well outside of their musical dealings. The two are now coming together once again, but this time they are doing it to celebrate the ingenuity of Black entrepreneurship with the fittingly titled "Entrepreneur."

The song addresses the unfair disadvantages that people of color face on the road to success but also highlights how Black people are still able to thrive in spite of them. "I am black ambition / I am always whisperin' / They keep tellin' me I will not / But my will won't listen," he sings in the first verse. JAY-Z comes in with a word on making your dollar count, with him rapping, "Black Twitter, what's that? When Jack gets paid, do you? / For every one Gucci, support two FUBUs." JAY has come under a bit of fire for that line, though, with some commenting on how shortsighted it is. Still, the gist of the line is understood as the rap vet encourages our communities to stand proud and take ownership of what we create.

The two stars don't appear at all in the video for the track. Instead, they shine a light on all the Black entrepreneurs doing the damn thing. Some of the names and faces — including Tyler, The Creator, Issa Rae and the late great Nipsey Hussle — are instantly recognizable. Others might be new to some or tried and true to others. Either way, it not only encourages us to support our brothers and sisters who are doing it for themselves but also lets us know that there is a place for all to make strides in business ownership.

"Thank you to Jay, and to every Black queen, king and entrepreneur who made this all happen!" Pharrell wrote on Twitter upon the video and single's release. "This is for you…and your Black vision of the future." Take a look at just how bright that future is when you press play.