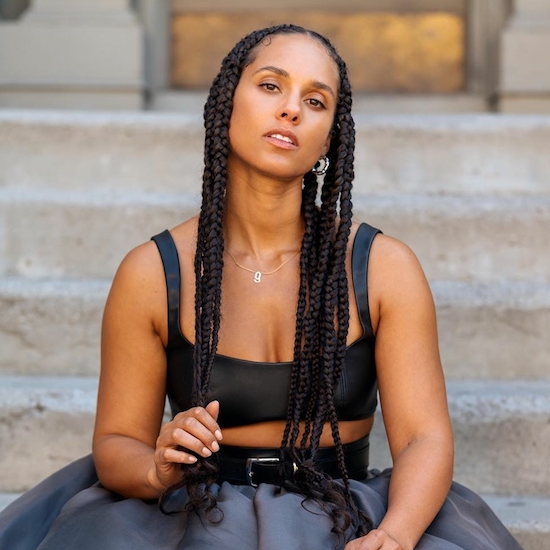 Last week Alicia Keys released her seventh album, the self-titled collection ALICIA. When an artist releases a self-titled project late in their career, it either symbolizes the culmination of years of success, a rebirth or going back to basics. For Keys, it’s a little bit of all three. The video for her latest single “Love Looks Better” represents this synergy.

“Love Looks Better” is an uptempo pop track about realizing love is all you really need in life. “All I, all I ever wanted / Was a dollar and a chance,” she sings in the opening lyrics. She changes her tune later in the song, however. She’s no longer caught up in lofty dreams but in the idea of being madly in love, singing on the bridge, “You're all I ever wanted / So can we talk for a minute? / Just stop for a minute / 'Cause all I wanna do is you.”

In the video for the track, Alicia sheds her glitz and glamour, getting back to what’s important. If you’ve been following the “Fallin’” singer since the beginning of her career, you'll recall that she started out with a more around the way girl look. What inspires her to take off her cool? While at a photoshoot wearing a billowing skirt that requires assistants just so she can walk, she sees a young girl with her arm raised in a Black power fist. Throughout the clip, Keys sees more symbols of defiance and she finally decides to escape from the vehicle she's riding in to take her message to the streets. She sheds her huge skirt, revealing a pair of jeans underneath, and performs an impromptu concert on the block. There are a few touches that feel cheesy, like Alicia finding a pair of fresh Timbs on a telephone wire that fit her perfectly and sitting with the young girl on the stoop and taking a picture, but we’ll allow it.

Along with sharing “Love Looks Better,” Keys also took a trip across the Atlantic and swung by the COLORS platform to give us a performance of another standout track from her album, “Three Hour Drive.” Instead of featuring her duet partner on the album, Sampha, she was joined by SoulBounce fave SiR. While SiR doesn’t have the gravelly voice of Sampha, he doesn’t miss a step or a note, doing the track just as much as justice. Against a periwinkle-colored background, the two give us a seductive performance.

On ALICIA, Keys has gone for more sparse, piano-led ballads and R&B-ish tracks. There’s still a level of experimentation, but she’s also found her groove and represents an evolution of her message. Since she was the “Girl On Fire,” it seems like Alicia has been creating countless anthems to inspire. Unfortunately, those anthems were often as well received as an after school special. Now she’s grounded her message by delivering it in a way that feels more personal and, therefore, genuine. With ALICIA, Alicia Keys has found a way to make her message, whether it’s love, self-expression or resilience, work in harmony.