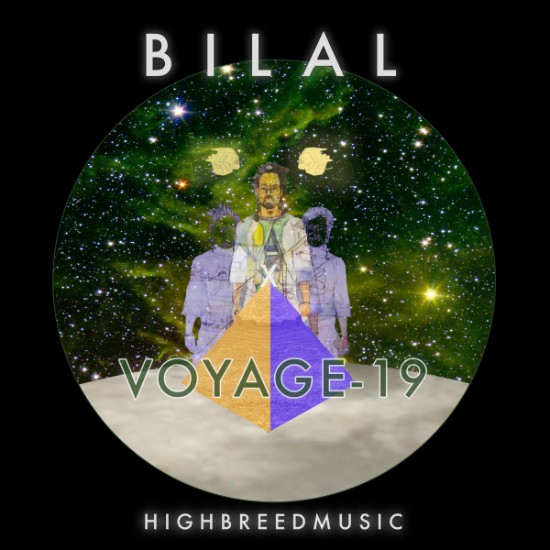 Despite lending his vocals to several albums and soundtracks over the past five years, Bilal fans have been patiently waiting for him to deliver a follow-up to 2015's In Another Life. Hope began to spring up after he dropped "Enough Is All I Need" early this year, but it took a pandemic for the Philly native to produce a collection of songs that no one saw coming in VOYAGE-19.

On the surface, the three-song EP seems like an all-too-brief tease. But in actuality, the project is a history-making affair. Recorded August 7th - 9th in collaboration with HighBreedMusic and founder/producer Tariq Khan, Bilal allowed the world to watch as he and 30 artists (musicians and vocalists) spent 54 hours remotely recording and composing the experimental session, piece-by-piece, from 30 different locations. This means that each participant recorded their contributions from the safety of their own homes – in real-time – while Bilal served as musical director and producer, on top of being the primary vocalist as well.

To pull off this incredible feat, Bilal called in a few favors from longtime friends, frequent collaborators and HighBreedMusic's extended family. Some of our faves among the mind-blowing lineup of featured artists include Erykah Badu, Robert Glasper, Keyon Harrold, Madison McFerrin, Nick Hakim, Cory Henry, Simon Mavin (of Hiatus Kaiyote), Marcus Strickland, Yahzarah, Ray Angry and Brandee Younger. A roster stacked with musicians of this caliber should tell you all that you need to know about the level of dopeness you can expect on VOYAGE-19. But it's better if you just download the EP and experience it for yourself.

Scroll down to preview "Voyage To A New World," featuring spoken word by Erykah Badu, then head to Bandcamp for your personal copy of the full project. In exchange for an eargasmic state of bliss, Bilal and HighBreedMusic are committed to sharing proceeds from all sales among the participating artists – many of whom are facing financial uncertainty (despite being accomplished career professionals), due to the pandemic. You can also support the project with a direct donation.