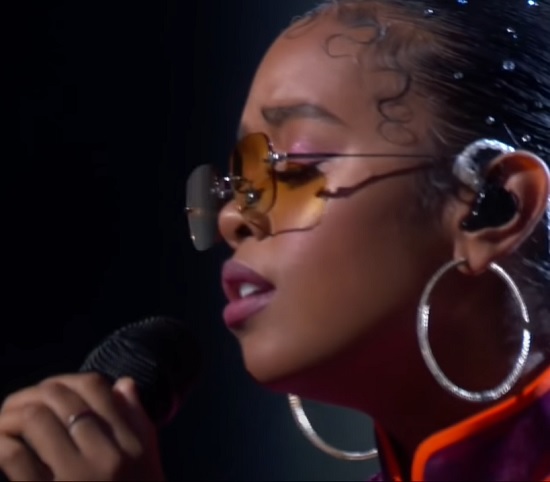 Last night, the biggest night in television went down with some changes during the 72nd annual Primetime Emmy Awards, or the "Pand-Emmys" as host Jimmy Kimmel called them. A few major moments happened during the broadcast — Regina King bringing it home for her role in Watchmen and Zendaya becoming the youngest winner in the Outstanding Lead Actress In A Drama category, among them — as well as a few upsets. One shining moment, though, was the "In Memoriam" tribute by industry "It" girl H.E.R., who performed a memorable cover of Prince's "Nothing Compares 2 U."

First sitting at the piano, she sang mournfully as the actors, writers, executives and talent who have entertained us through the years were memorialized. Halfway through the tribute, she stood up and pulled out her trusty guitar as she ripped an electrifying solo at the song's climax. The final moment was given to the late Chadwick Boseman, who starred in soaps and bit television parts before making his mark on the zeitgeist in Black Panther. While "Nothing Compares 2 U" isn't necessarily the song that comes to mind when we think of mourning the passing of loved ones, H.E.R. was able to make the tune beautifully elegiac.

In case you missed what might've been the most unique Emmys that we'll ever witness, take a look at H.E.R.'s memorable performance when you press play.