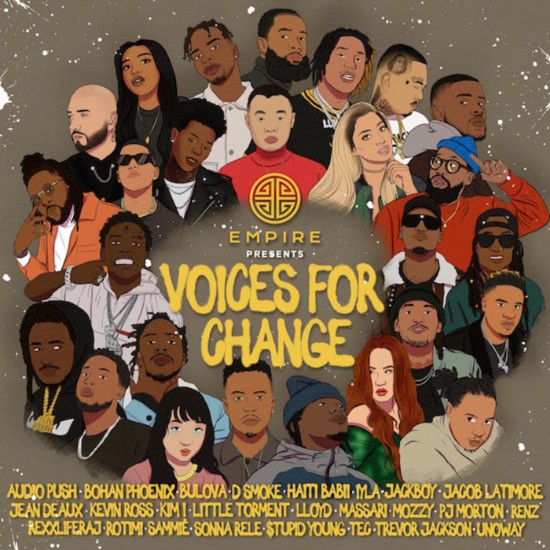 As a independent music label/distribution company, EMPIRE has had a hand in bringing some dope music to light over the years. But in these troubling times, they've decided to use their creative forces for a just cause. The label has released EMPIRE Presents: Voices For Change, Vol. 1 – a compilation album from EMPIRE artists around the world using their powerful voices to advocate for much needed change.

Voices For Change features a diverse roster of artists, spanning genres and geographic regions. Up-and-coming talents like Sonna Rele, iyla, Haiti Babii and Bohan Phoenix hold their own and capture our attention alongside artists who have been around a bit longer like Lloyd, Kevin Ross, Jacob Latimore, Rotimi and Trevor Jackson. A notable inclusion to the lineup is SoulBounce fave PJ Morton who despite having his own label and recently-released projects, took the time to lend his talents to the worthwhile project.

EMPIRE expounds on the concept album, stating, "Featured tracks address a range of social justice issues including racism, systemic oppression, police brutality and racial profiling, mental health, community organizing and the like. Each artist speaks directly from their own experiences, shedding light on issues specific to their own unique cultures and communities." Beyond that, everyone from artist to mixing engineer believed in the project so much that they opted to work for free. Additionally, the label is allowing each artist to keep their publishing rights and 100% of album sales will be donated directly to the ACLU.

Preview EMPIRE Presents: Voices For Change, Vol. 1 then visit the EMPIRE store or your favorite retailer and purchase the album to help support this worthy cause.