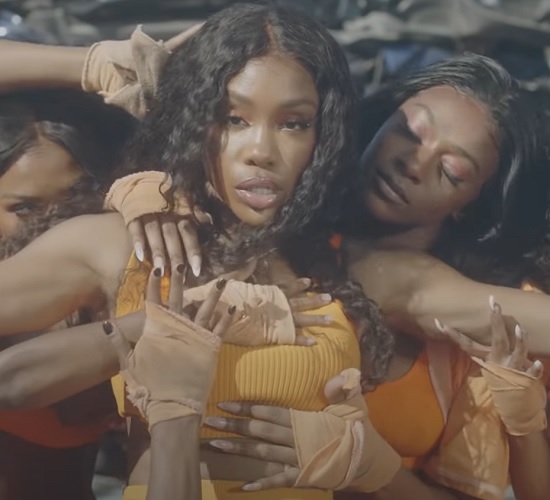 SZA took the world by storm with her five-time GRAMMY-nominated album CTRL back in 2017. She's since promised new music with no follow through (unless you count her many collaborations in the interim). However, at midnight she made good on her promises with the release of her single "Hit Different" and a dance-heavy, self-directed video for the track.

"Hit Different" is, in short, a bop. The track fits firmly within her '90s throwback sound with production provided by The Neptunes and a assist on the hook provided by feature king Ty Dolla $ign. The singer, meanwhile, takes the time to detail a relationship similar to the one from her single "Love Galore." "You wrong, but I can't get along without you," she sings at one point. "It's a shame and I can't blame myself, keep on lovin' you / You do it different."

The song has an undeniable similarity to an Aaliyah track ("4 Page Letter" and "Come Over" were definitely influences here), and SZA takes that vibe even further in the song's video. She goes for her usual tomboy chic look but incorporates much more dancing into the affair than she's done before, with a full-on routine starting the video and continuing throughout. There's some imagery here that we'd definitely like to know the meaning of (specifically the scenes in which SZA's covered from the neck down in what appears to be blood). But then the scene shifts to the beauty rocking beaded braids and a swimsuit while making suggestive use of a pommel horse on what appears to be another new track.

All suggestions seem to be leaning toward a new project from SZA in the near future and we are very excited about that prospect. You'll be hype too once you check out both the stream and video for "Hit Different" right here.


TAGS:  aaliyah, audio, SZA, the neptunes, Ty Dolla $ign
Previous: Sade Announces ‘This Far’ Vinyl Box Set & Hints That New Music Is On The Way Next: Bartón & Jacob Latimore Team Up To Give Us Something ‘Special’