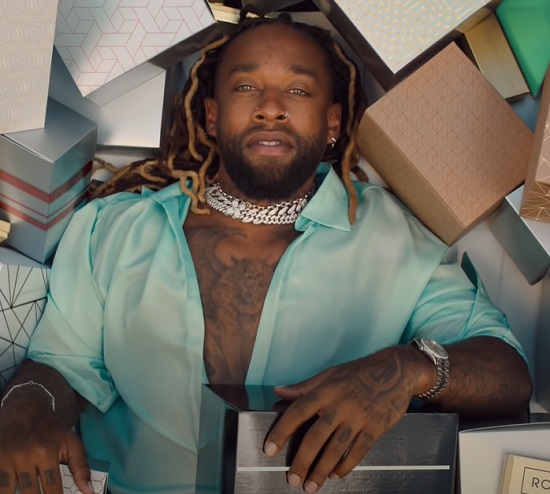 Ty Dolla $ign has never met a feature that he didn't like. But while he's known for singing hooks and adding flair to his homies' tracks, his solo career is also thriving. He's set to take us on another musical journey this fall with his upcoming album Dream House. But first, he drops his new video for "Expensive."

"Expensive" is everything you'd expect from Ty. A speaker-shaking beat accompanies him as he waxes poetic about his two favorite things: women and wealth. The video follows suit, with Ty hanging around his impressive mansion with his lady in tow. But he isn't just satisfied with stunting and flexing with his luxurious trappings. He also adds in some digital effects so that it seems money is literally coming out of his a** and his lady is swimming in a pool of diamonds. As if that wasn't enough, Nicki Minaj is on hand to make a socially distanced cameo while rapping her verse. The head Barb in charge looks as expensive as the name of the song implies draped head to toe in designer while looking in a mirror showing off all the stacks behind her.

Though the video looks rich, we must admit that the song is a bit of a throwaway. It doesn't break the mold like recent single "Ego Death" nor does it really speak to our inner Ratchet Rudies who just want to do hoodrat stuff with our friends. You might be inclined to disagree, however, when you check out the track and video for yourself.


TAGS:  audio, Nicki Minaj, Ty Dolla $ign
Previous: Monica Is Down In The ‘Trenches’ With A Love On Lockdown Next: Avehre Makes A Powerful Statement With ‘Bulletproof’