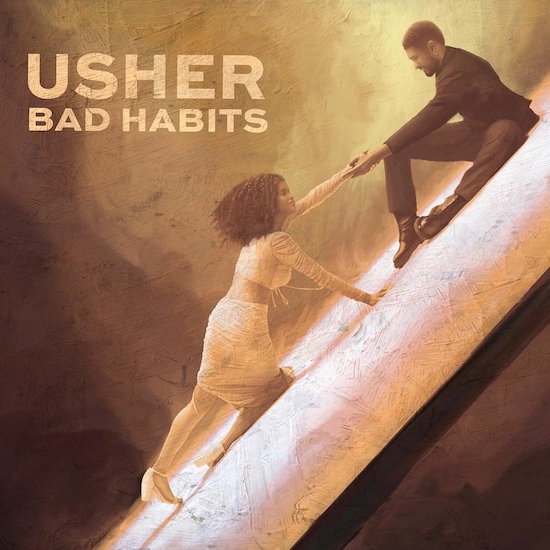 While we wait for the sequel to Usher's blockbuster album Confessions, he has been keeping us well fed on a steady diet of new music. We've already heard "Don't Waste My Time," "SexBeat," "California" and "I Cry," and now he adds a fifth single to our plate with his latest song "Bad Habits." And it's a good thing because "Bad Habits" is the most Confessions-esque track we've heard from Mr. Raymond in the lead up to his next project.

"Bad Habits" finds Usher admitting all of the ways he's done his Miss Right wrong. Although he believes in love (or at least the concept of it), he has issues with commitment, monogamy and generally keeping it in his pants. "I love love, I'm just bad at it / I just can't escape all of these bad habits / I had way too many one nights, yeah / I keep messin' up my love life, yeah," he croons on the chorus. He sincerely sounds as if he regrets his entanglements and overall bad decisions even though he keeps messing up over and over again. "You take me back and then I lie to you again / I slipped into the DM of your best friend / On God, I didn't mean it / Truth is I only messed up because you seen it," Ursh sings to begin the second verse, and as much as you want to feel sorry for him, his wounds are self-inflicted.

Lyrically, "Bad Habits" is what R&B hits are made of, and Usher sells it with his butter-smooth vocals. The mid-tempo bop gets kicked up a notch on the third verse with a well-placed sample of Zapp's "Computer Love" that comes out of nowhere that will induce a body roll or three while listening. The song is produced by Pierre Medor and Lxrd Rossi who co-wrote it alongside Usher, Theron Thomas and Keith Thomas.

Usher dropped "Bad Habits" simultaneously with its music video directed by Chris Robinson. The visual begins with our main man jogging back into the house and frantically looking for his phone. He hollers out to his girl to see if she's seen it and when he finds her she hands it over to him, clearly having just seen some of the filth flarn filth he's been hiding from her. Instead of blowing up and arguing with him, she sadly asks what's going on and Usher sits her down to show her. He takes center stage on the set to begin his dramatic dance interpretation with a crew of dancers joining him. We see a flashback scene of his leading lady finding him pushing up on some other chick, so Usher's wayward ways are not new to her. When he's not stepping out in the name of love on his girl, Usher dances throughout most of the video, showing us he's still got moves and impressing with them during the dance breakdown to the "Computer Love" sample. In the end, the question of if she decides to stay or if she decides to go is ultimately answered when Usher literally loses his grip on her.

Of all the new singles we've heard thus far from Usher, "Bad Habits" might just be the strongest contender for a Confessions follow-up. The song and video check all the R&B boxes and have us excited for this new album now. Something else we're excited about is Usher's upcoming residency at The Colosseum at Ceasars Palace. Tickets for Usher: The Las Vegas Residency are on sale now, and, Lord willing and the 'Rona don't rise, the shows will begin in July 2021.