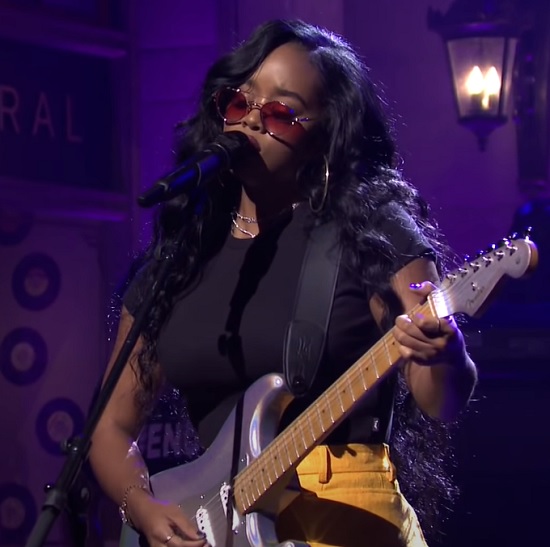 British songstress Adele was the host of this past weekend's episode of Saturday Night Live. While a music star hosting on the venerable television staple usually means pulling double duty as the musical guest, that wasn't the case this time around. Instead, Adele stuck to the funny and allowed H.E.R. to provide the night's soundtrack with her two newest singles, "Damage" and "Hold On."

The two sets were actually H.E.R.'s SNL debut, and the young star made sure that those unfamiliar with her R&B stylings took notice. "Damage" was first up and the singer restaged her live performance music video for the performance. Walking out in a similar sheer black top, glasses and pants and with her hair luxuriously wavy, she commanded the stage with the verve of a veteran performer. If there was one drawback to the affair, it was that she wasn't able to show her full range as a musical performer.

She made up for that with her performance of "Hold On," though. Changing to a black top and sunny yellow pants, she took the stage with her signature guitar as she sang the soulful and emotional tune about choosing to let go of a love that has a hold on her. While performing the song, which she just released a few hours before the show, she made sure to make a statement by having her band don shirts with the message #ENDSARS in reference to the protests against a police unit in Nigeria known for extreme brutality against the country's citizens.

All in all, H.E.R. proved why she's garnering all the well-deserved buzz surrounding her and has us even more excited for what she's got coming down the pike. Check out a stream of "Hold On" and the singer's SNL performances below.


TAGS:  adele, audio, H.E.R.
Previous: Sharon Jones & The Dap-Kings ‘Just Dropped In’ With A New Album Of Covers Next: Usher Links Up With Marshmello & Imanbek To Show That It’s Never ‘Too Much’