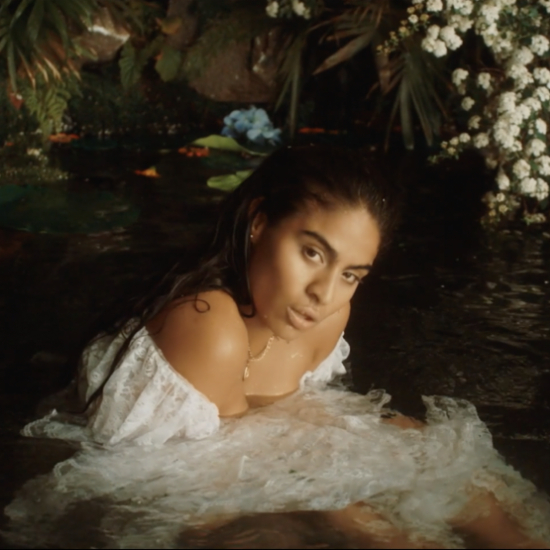 Jessie Reyez’s BEFORE LOVE CAME TO KILL US was released earlier this year to critical acclaim. Featuring singles like the 6LACK-assisted “Imported” and “Far Away,” the Colombian-Canadian singer blew us away with her deeply personal ballads about love and life. Now she’s back with an encore, the apply titled BEFORE LOVE CAME TO KILL US+. The extended project features two new tracks, “NO ONE'S IN THE ROOM” and “SUGAR AT NIGHT,” both welcome additions to her debut magnum opus.

“NO ONE'S IN THE ROOM” finds Jessie trying to reconcile the contradictions of her religious upbringing, using that to explore her own identity. “Who am I when no one’s in the room?” she asks herself earnestly on the chorus. The visual for the track takes place in a church during service, giving us a behind-the-scenes look at everyone behind the mask they wear in public. Jessie sits in a pew looking at all her fellow sinners, from the priest with a boyfriend to the nuns smoking weed outside. The video goes meta in the second verse as we see that this is a video production within the video and everyone starts acting normal during the break.

“SUGAR AT NIGHT” is about a toxic lover who doesn’t have his priorities together. “You’re like sugar at night / You just f**k up my sleep,” Jessie sings on the chorus of the guitar-led ballad. But Jessie has her own issues that keep her caught up in this bad relationship, stating that she’s “25 years past being Miss Perfect.” The song is brought to life in a creative visual reminiscent of a horror movie. The video starts with Jessie running in the dark from a mysterious threat. The scene then transitions to scenes of Jessie looking forebodingly over a faceless lover who’s dragging her down, sometimes literally. The relationship is a real-life nightmare as his presence haunts not just her dreams but her waking hours.

Jessie Reyez's BEFORE LOVE CAME TO KILL US+ is available for streaming and download from a variety of digital music services. Give “NO ONE'S IN THE ROOM” and "SUGAR AT NIGHT" a spin and peep the videos for both songs right here.


TAGS:  audio, Jessie Reyez
Previous: Jhené Aiko Joins Forces With ‘black-ish’ To Get Out The ‘Vote’ Next: Allow Lyric Jones & Vic Mensa To ‘Show You How’ To Do It