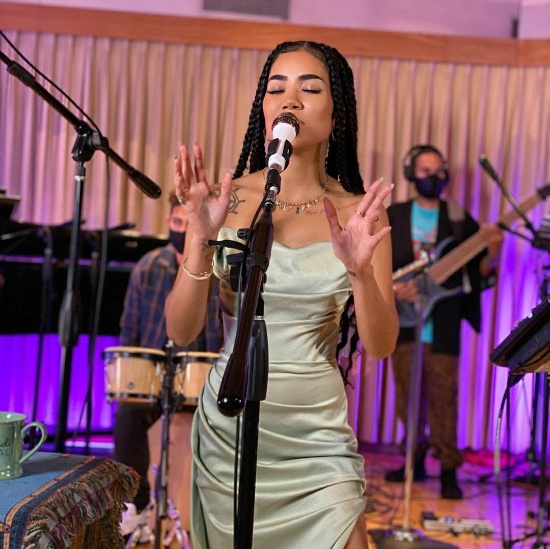 NPR's Washington, DC headquarters may still be shut down and closed to the public until further notice, but their NPR Music division has proven that the show must go on with their Tiny Desk (Home) Concerts. The work from home version of their Tiny Desk Concert series has delighted music lovers throughout the pandemic shutdown and featured numerous artists performing live from the comfort of their living rooms or other spaces. The latest SoulBounce fave to grace the Tiny Desk (Home) Concerts series was Jhené Aiko who delivered a stunning mini-concert that was 18 minutes of pure musical bliss.

Dressed to the nines in a floor-length, seafoam green gown that she can recycle to wear to the GRAMMYS, a wedding or the prom, her attire fit the mood of the room, which included a harp that brought an automatic air of sophistication to the studio setting. Joining harpist Gracie Sprout to back Aiko were Julian Le on keys, Bubby Lewis on bass and Brian Warfield on percussion. Before the band even played a note, however, the first sounds heard include Jhené greeting our ears with a sound bath of singing bowls that set a soothing, spa-like tone. The relaxing vibes continued as she launched into her first song "Lotus (Intro)" taken from her most recent album Chilombo. From there, she reached way back to her first release, 2011's Sailing Souls mixtape, to sing "Stranger" and "Do Better Blues."

For the remainder of her performance, Jhené jumped back and forth with selections from Chilombo and Souled Out – singing "To Love & Die," "Born Tired" and "W.A.Y.S." – smoothly segueing between each song. Her single "Summer 2020" off of Chilombo (Deluxe) followed before she brought her concert to a glorious end with a peaceful intro to "Eternal Sunshine" featuring only her voice accompanied by her playing the singing bowls again.

Known for her signature soft vocals, Jhené Aiko sounded simply amazing during her Tiny Desk (Home) Concert and impressed with her tender, pure vocals. Choosing to keep things classy and rated PG instead of singing some of the more risqué tracks from her catalog was a good look and showed a more mature jazzier side to the petite R&B slayer.


TAGS:  Brian Warfield, Bubby Lewis, Gracie Sprout, jhene aiko, Julian Le
Previous: ‘When It’s All Said And Done,’ Givēon Isn’t Quite Ready To Move On Next: Sidibe Enchants In ‘Place For You And I’