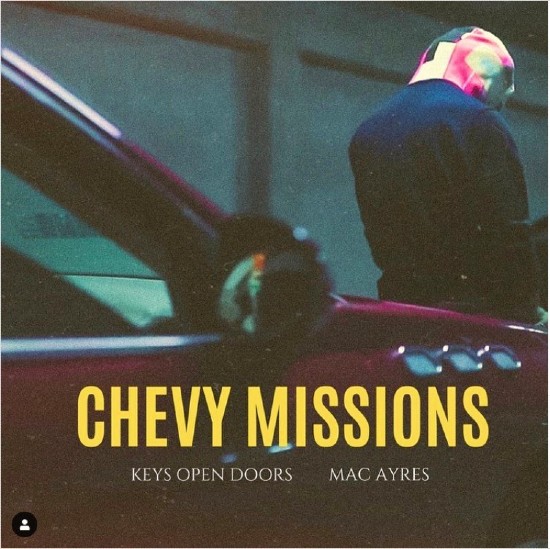 As a follow-up to their previous collaboration "Same Old Strangers," songwriter/musician/producer Keys Open Doors and singer/songwriter/multi-instrumentalist Mac Ayres team up once again for their latest single “Chevy Missions.” The track oozes with the cool, carefree energy of LA as they tell tales of making their own way through life and the music industry with no blueprint. Though it’s easy to get lost in the laid-back vibe, listeners won’t miss the theme of carving your own way and making your own rules. Keys and Mac make it clear that one’s journey is indeed their own, with the greatest lessons learned along the way.

One can only hope that these latest releases are a sign of more collaborations between these two talented artists. Their unique styles truly complement each other, with clear hip-hop, R&B and jazz influences. Whereas Keys’ verse added a bit of edge to their previous effort, we were pleasantly surprised to hear Mac get his trap-style cadence on for the latest single. On a recent social media post, Keys noted that, though he’s released the least amount of music this year, he’s also grown the most. Hopefully, this growth has greatly influenced his art, as we optimistically take his statement to mean that he’s got a lot to say. We certainly look forward to hearing more, whether solo or alongside the likes of bar-raising and creatively-inspiring artists such as Mac Ayres.

Ride out and give “Chevy Missions” by Keys Open Doors and Mac Ayres a spin. Be sure to add it, along with “Same Old Strangers,” to your collection from your preferred digital platform.