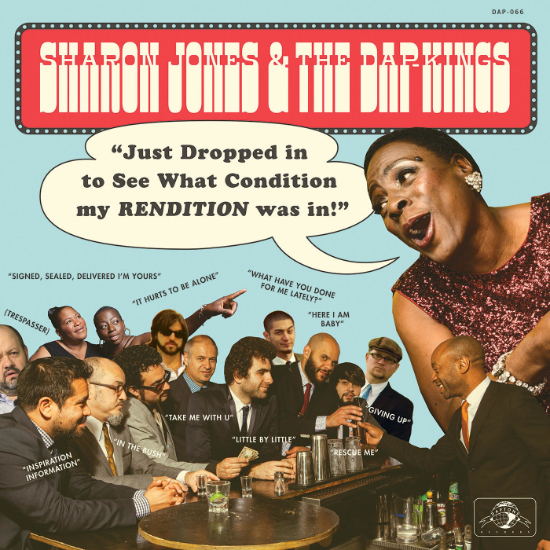 It's been a few years since Sharon Jones' passing, but her music legacy lives on in our hearts and in music collections around the world. On top of an already rich catalog, her musical family/band The Dap-Kings continue to surprise us with new music – more specifically, little known or previously-unreleased gems from the vault. While their original tunes have left an indelible mark, the band has been known to put some Dap-stank on a cover or two over the years. In fact, they've been commissioned (many times) to cover iconic songs for everything from TV commercials to rap samples. Their newest release Just Dropped In (To See What Condition My Rendition Was In) provides a satisfying mix of their most popular requests and previously unreleased covers.

The album title itself is a witty twist on "Just Dropped In (To See What Condition My Condition Was In)," a 1968 hit for both First Edition (with Kenny Rogers on lead) and Bettye Lavette. The song is special to the Daptone family holding distinction as the very first recording done at the Daptone House of Soul studio in 2002. Other popular tracks include Stevie Wonder’s 1970 classic “Signed, Sealed, Delivered I’m Yours” and Bad Medicine’s 1974 psychedelic-funk instrumental “Trespasser” (featured on the American Gangster soundtrack). Of course, one of our favorites in this category is their alternate spin Janet Jackson's "What Have You Done For Me Lately," originally featured on their 2001 debut album Dap Dippin'.

Just Dropped In... highlights other fan favorites as well. For example, “Little by Little,” “Inspiration Information,” “Here I Am Baby” and “Take Me With U” were created for tribute projects to Dusty Springfield, Shuggie Otis, The Marvelettes and Prince, respectively. Our love for the Purple One is no secret, and we're pretty pleased with the Daptone reinterpretation. The album also introduces songs that were left on the cutting room floor. This includes hits by Fontella Bass (Motown gem “Rescue Me”) and disco ensemble Musique (cheeky tune “In The Bush”), which were recorded for The Wolf of Wall Street soundtrack but never used. Don't get it twisted, though. Just because they weren't released doesn't mean that they aren't worthy of your listening ear.

This stellar collection –  which also houses covers of Gladys Knight, Al Green, Bob Marley & The Wailers and Woodie Guthrie – delivers further proof of why Sharon Jones & The Dap-Kings were dubbed "The Baddest Band in the Land."