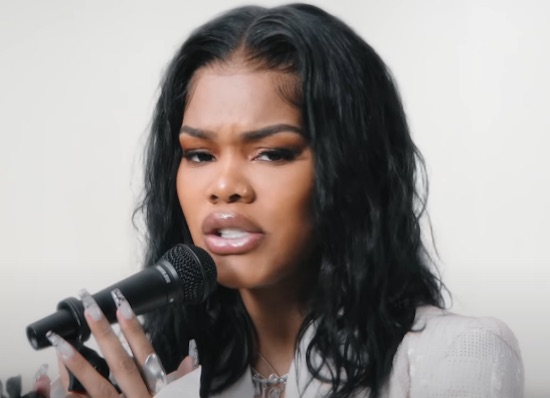 Another week, another video from Teyana Taylor’s THE ALBUM. And we’re not mad. Under the name Spike Tey and The Aunties Production group, the Harlem native has brought her creative vision to life with an onslaught of creative videos, from the throwback '90s vibes of “HYWI” to the ethereal mood of “Wake Up Love.” Her latest visual is for her ballad “Lose Each Othe,” with a special guest appearance from the pop icon Sir Elton John. Yes, that Elton John. Apparently, Teyana put it out in the universe that it would be dope if the living legend blessed her video. And the universe called back and said, “Hello darling, it’s Elton. I’d love to do your video.”

“Lose Each Other” is a smooth, piano-led song about trying to hold on to someone you’re still in love with, even when the relationship is over. Whether it’s going to see his mother or going to his house for a late-night creep, she wants to stay in touch.

The "Lose Each Other" video opens with Sir Elton seated at a black grand piano on a white soundstage. A pair of dancers enter the stage and then we finally see Teyana, still very pregnant, standing amongst Greek statues, wearing a mesh black outfit and an afro so huge she has to use her hands to hold it up. As Teyana sings her heart out wearing different outfits against simple backgrounds, the dancers dramatically play out the drama of the ballad. Once the dancers call it quits, Teyana does her best Slash impression on the guitar, before the clip ends with her singing across from Elton on the piano.

We gotta give it up to our good sis Teyana because her vision and grind are unstoppable. We don't know what Tey and The Aunties have coming next, but trust and believe that just giving birth to her second child won't slow her down one bit.


TAGS:  elton john, Spike Tey, teyana taylor
Previous: Vivian Green Prepares To Offer ‘Love Absolute’ With ‘You Send Me’ Next: Sharon Jones & The Dap-Kings ‘Just Dropped In’ With A New Album Of Covers 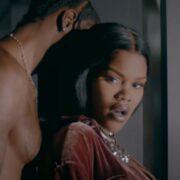