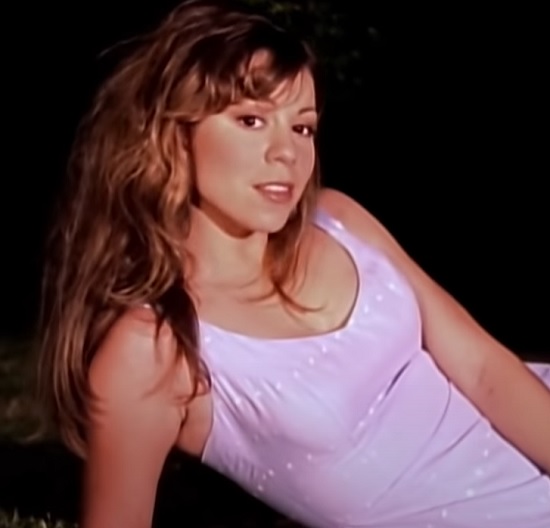 Picture it, 1996. Mariah Carey is once again at the top of the charts due to her fifth studio album Daydream and its myriad of hits. In April of that year, MC dropped the album's sixth and final single "Underneath The Stars." Unlike the previous releases, the single didn't make it to the Billboard Hot 100, but it always had a special place in the singer's heart. So much so, that she even recorded a video for the track that was never released. But now that Mariah is making a career victory lap with the release of The Rarities, she's dug up the long-lost video much to the delight of her fans.

If you're a Mariah Carey fan, then the video will be a familiar return to her visual style of the era. It mainly consists of a performance by Mariah in a purple slip dress shot in the grainy style that she utilized for videos from that time like the "Always Be Me Baby" remix. That footage is mixed with clips from her in concert during her Daydream World Tour as well as life behind the scenes on the road. It's a sweet treat down memory lane that reminds us of simpler times.

Along with this unexpected throwback, Mariah also announced that her new Christmas special would be arriving on Apple TV+ next month. Mariah Carey's Magical Christmas Special will air on December 4th and feature appearances from some of her famous friends — including Snoop Dogg, Jennifer Hudson, Jermaine Dupri and, surprisingly, Ariana Grande. In addition to that, a retooled version of her song "Oh, Santa!" with JHud and Ariana will be released the same day along with a companion soundtrack for the special. Looks like our Christmas queen has returned to take her throne.

While we wait for her latest dose of holiday cheer, take a trip down memory lane with Mariah Carey in "Underneath The Stars" when you press play.