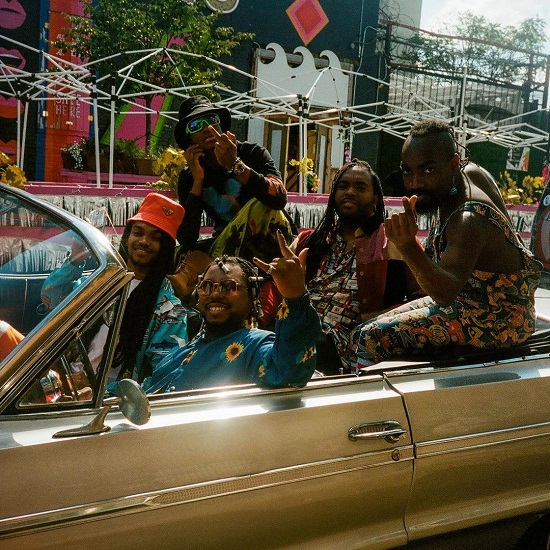 Phony Ppl popped off earlier this year when they got their funk on with Megan Thee Stallion on their jam "Fkn Around." However, while that track was indeed a nice little groove, it arrived way back in January. That means it's past time to hear another cut from our favorite Brooklyn crew. Luckily, they're right on time with the release of their latest single "On My S**t."

Like all of the jams from the Phonies, "On My S**t" melds jazz, hip-hop and R&B to create an infectious cut asserting how much they're feeling themselves. "I play the outfield / That's usually / Humbly watching / Nope, not today / Put a disclaimer out / 'Cuz I'm on my s**t tonight," the group's lead vocalist chirps on the song's bouncy chorus. Meanwhile, the verses are full of swagger-fied lyrics about the antics that he and the fellas are getting into while on the prowl. They're soon joined by fellow Brooklyn son and featured guest Joey Bada$$, who drops a fun 16 that complements the song's fun-filled lyrics.

The track's video builds upon the feel-good vibes as the crew cruises down the street in their droptop whip. From there, we're taken from day to night as they shut down the streets and the club with a few fly ladies. Somehow, we're then taken to a mine where the fellas drop a groove while they work. This setting also allows for Mr. Bada$$ to come through with his feature as they bring the party to the underground before wrapping things up.

Word on the street is that Phony Ppl have an album set to be released next year, on which "Fkn Around" and "On My S**t" will be featured. Here's to hoping they keep up the fun vibes, as we're sure we'll definitely need them if 2021 is anything like 2020.