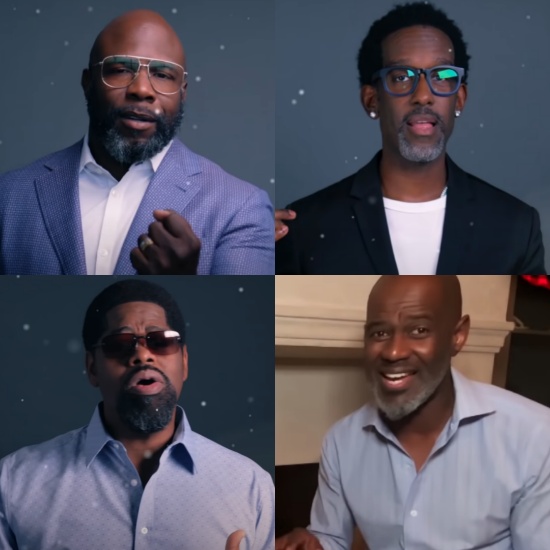 Mariah Carey may be the undisputed queen of Christmas, but her "One Sweet Day" collaborators Boyz II Men are arguably the kings of the holiday. Much like Mimi and her beloved "All I Want For Christmas Is You," the Boyz created a modern Christmas classic with co-writer/co-producer Brian McKnight when they released the single "Let It Snow" from their Christmas Interpretations album in 1993. Almost three decades later, "Let It Snow" is a Christmas standard that gets revisited like clockwork every holiday season since its release. It is the quintessential '90s R&B Christmas song that will set any soul holiday playlist off.

"Let It Snow" is indeed perfect, but that didn't stop the Men and McKnight from revisiting the classic to spruce it up a bit for "Let It Snow (2020 Holiday Edition)." For the remake, they enlisted producers Adam Blackstone and Darek Cobbs who laced the fellas with an updated track that stayed true to the original but added a few instrumental flourishes here and there, including a brand new intro, more synths, a deeper bass line and distinctive guitar. The sound bed isn't the only thing that's new about the song, with Wanya Morris, Shawn Stockman, Nate Morris and Brian McKnight actually redoing their vocals for this version (and Shawn even adding a few verses from Bing Crosby's "White Christmas" in a surprise addition to the song). There's no need to worry, though. Unlike many of their contemporaries who sound nothing like their '90s selves, BIIM and Brian all brought their A-game and sound just as good as they did back in the day.

Boyz II Men and Brian McKnight debuted their newfangled "Let It Snow (2020 Holiday Edition)" on OWN's holiday special Our OWN Christmas hosted by DeVon Franklin and Meagan Good. In addition to their soulful, socially-distanced performance, the music special featured performances by the Clark Sisters, PJ Morton and Lalah Hathaway. In case you missed Our OWN Christmas when it premiered, you have multiple opportunities to catch it on OWN this month, and you can also watch the magic Boyz II Men and Brian McKnight made right here and get ready to body roll around the Christmas tree.