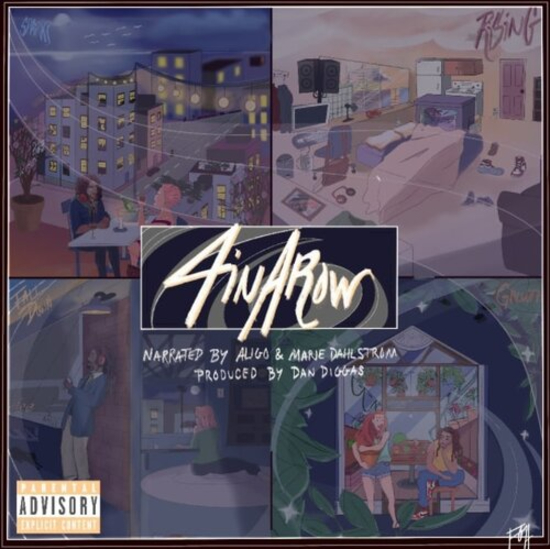 Each January, the word "change" becomes the buzzword on everyone's lips. And while it typically signifies a positive shift or forward movement, we're glad that certain things will always remain the same. Take Marie Dahlstrom's music, for example.

We're not saying that the Bounce-Worthy singer/songwriter/producer hasn't evolved over the past decade. Quite the contrary. But whether performing solo or in collaboration with other artists, the quality of her output (and those around her) is consistently amazing. Even in quarantine, the evidence is undeniable with the 2020 release of her debut album (Like Sand), two Her Songs EPs and notable guest features...all while starting her own label JFH Records. Now the trend continues as she links with producer Dan Diggas and rapper Aligo for an EP collaboration entitled 4inARow.

The trio has more in common than a love for music and a knack for captivating our ears. They actually shared a London flat for over a year. Despite each working on personal projects (and helping each other in the process), they realized they also had to find a way to join creative forces for something distinct. A plan was hatched to carve out 4 hours (8 pm - midnight) for four consecutive days, with the intent to create a new song each night – hence the title, 4inARow. Aligo explains, "Theme-wise there wasn't a plan at first but we knew we wanted to explore different emotions and feelings with each night that passed. By the end we noticed the songs came together in a cohesive way that demonstrated a four stage cycle of love/relationships."

The musical cycle begins with "Sparks," a sensual, slow-burning groove led by Aligo's magnetic bars and a hypnotic melody by Marie. The flames settle into the comforting warmth of a fulfilling relationship on "Rising." Lead single "Fall Down" tests the strength of that commitment as it explores the cause and effect of arguments and issues like trust and communication. While these disagreements can tear down a relationship, "Growth" reminds us that they can also make it stronger in the end. Diggas' production is stellar throughout, fusing chillwave, R&B and lo-fi beats to create the right atmosphere for each track – giving room for the artists to simultaneously blend and stand out as the narrative unfolds. 4inARow may be their first project, but we're pretty sure it won't be the last we hear from this collective.

We're loving the album, but Marie has an upcoming debut that will be her most special yet. She recently announced her pregnancy by posting a picture of her adorable baby bump. Yay! Congratulate the musical mama and papa and support independent art by downloading 4inARow today.