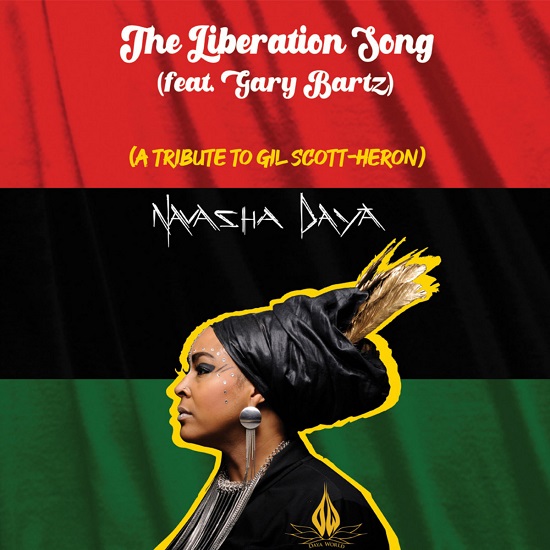 If the jazz artist Gil Scott-Heron were still with us today, we have a feeling that he would have a lot to say about what's going on in the world. However, the music that he's left us is more than sufficient in calling out the status quo while also celebrating the strength of Black people. Navasha Daya plans to pay tribute to her cousin with her upcoming project Legacy: A Tribute To Gil Scott-Heron. She fittingly introduces us all to the album with its lead single, "The Liberation Song (Red, Black and Green)."

The song — which shows us the importance of the colors red, black and green to Black people — is one of Gil's best-known songs. Navasha opts to keep the essence of the song with a version that includes the hypnotic piano of the original while adding in vocal textures that are unique to this take. Their inclusion actually adds to the already rich musical tapestry, melding jazz and R&B in a way that's invigorating. Meanwhile, she also taps legendary sax player Gary Bartz to take part, with him contributing fiery jazz licks and an eventual solo that brings everything all together. But it's Navasha's powerful voice that guides the song, with her captivating vocal emphasizing each of the poetic lyrics and making them seem epic and urgent in scope.

"I chose 'The Liberation Song (Red, Black and Green)' as the lead single for this project because it is a timeless reminder of where we have been and where we must be. It is a reminder to remember and honor those names, known and unknown, who sacrificed and fought for our freedom. It is also a reminder of the work that still must be done today," Navasha said in a statement.

Legacy: A Tribute To Gil Scott-Heron is set to be released later this year. However, you can pick up your own copy of "The Liberation Song" via Bandcamp and stream the latest from Navasha Daya right here.


TAGS:  audio, Gary Bartz, gil scott-heron, navasha daya"
Previous: Leslie Odom Jr. Makes A Statement With ‘Speak Now’ From ‘One Night In Miami’ Next: Jon Batiste Gets Jiggy In ‘I Need You’