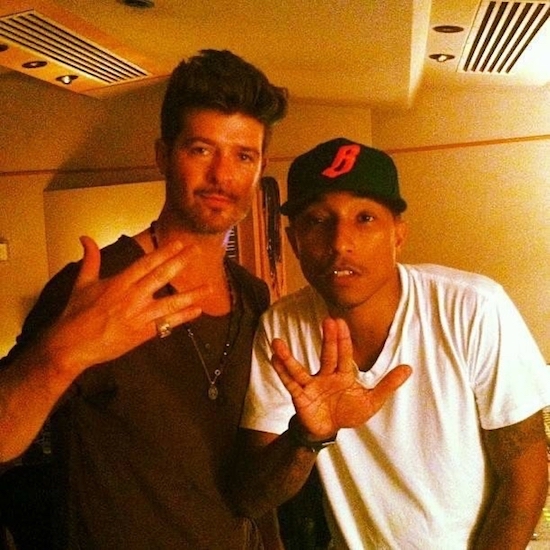 Robin Thicke and Pharrell Williams have a long history of making music, most notably on the controversial hit single “Blurred Lines.” After a long hiatus and court case, the two have reunited in the studio for Thicke's newest song, “Take Me Higher.” Like on his previous single “Beautiful,” Robin is still in his old school bag, but this time he’s giving us an uptempo '70s-inspired jam that samples Kool & The Gang’s “Ladies Night.”

“Take Me Higher” is about a love that feels just as intoxicating as a hit of your drug of choice. The song starts off with an unassuming gospel guitar lick and Robin giving us some soulful ad-libs that sound straight out of a Black church. But then he switches things up, giving us a digital disco groove with synths and horns. This helps us feel the urgency behind the lyrics on the track, where Robin is racing home to be with his lady love and he sings “I want to overdose on your touch.”

“Take Me Higher” is the latest listen from Thicke’s upcoming album, On Earth, and in Heaven, slated for release on February 12th. Thicke explained the inspiration behind the project: "I feel like I’m finally the person I set out to be. I’m able to laugh at anything, which I’ve realized is the greatest superpower. I’ve fully embraced it, and nothing has been better for my soul. When I saw the phrase ‘On Earth, and in Heaven,’ I realized that’s what I’m singing about: the people who aren’t here and the people who are here that made me who I am."

After experiencing so many lows, it's great to see Robin on the road to something higher.