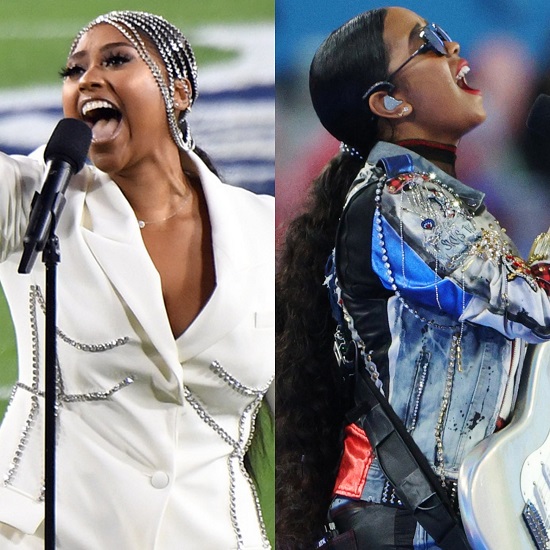 The Weeknd might have been the headliner at this year's Super Bowl, but he wasn't the only musical talent on the bill. The event turned to two of the most soulful ladies of the current R&B landscape — Jazmine Sullivan and H.E.R. — to deliver the two patriotic anthems of the night. Not only did the ladies, who have worked together on "Girl Like Me" for Jazmine's EP Heaux Tales, deliver for the occasion, they showed the world exactly why their respective talents are ones to watch.

H.E.R. was first up with her performance of unofficial anthem "America The Beautiful." The singer-songwriter switched up the arrangement, infusing it with a lullaby-like guitar rhythm that made the song feel dreamy and romantic. She didn't keep it in that vein long, though. Electric guitar lit the arrangement on fire as a choir before she hopped back on the mic to belt out the last few refrains. She then ended her time on the field with a restrained final moment, holding out the "sea" in a sweet, quiet moment.

The star of the patriotic moment, though, was Jazmine Sullivan, who performed "The Star-Spangled Banner" alongside country music star Eric Church. Though it was billed as a duet, the set was really a showcase for Jazzy. She hopped on for the second part of the first verse, taking us all to church when she did (and effortlessly eclipsing Eric as well). Jazmine's voice soared just like the rockets she sang of, making sure that those who might not be sure of who she is definitely know her name now.

Both ladies offered outstanding performances that once again proved why Black voices are very, very important in American culture. Here's hoping that Jazmine Sullivan and H.E.R. see their stars continue to rise after having such a high-profile opportunity. Check out their breathtaking renditions of the patriotic numbers below.