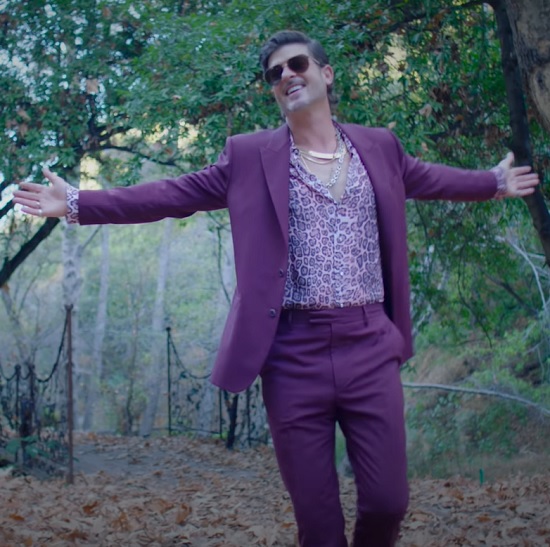 Robin Thicke has officially returned! The singer-songwriter has been dropping singles like breadcrumbs over the past couple of years. Now, however, he's finally released his long-anticipated eighth album On Earth, and in Heaven. The set's already given us a few singles and now, to celebrate the occasion, he's also dropped off a brand-new music video for his track "Look Easy."

"Look Easy" is Robin Thicke doing what he does best: crafting a song that makes you want to fall in love. The slinky track is breezy and simple, crafting a sound as effortlessly cool as the title. He takes a similar approach to the song's video, though with a bit more cinematic flair. We first see him falling from the sky and crashing into an ocean. As he collects himself on the shore, he sees a glimpse of the mystery woman that he'll chase throughout the clip. As he follows after her, we're shown TV screens of Robin's past video work throughout the years, even including the clip for 2002's "When I Get You Alone" (which features a shaggy-haired Robin before he found the cool, impeccably styled persona that made him a household name). He eventually catches up to his mystery woman, but he doesn't end up with her. Instead, he ends up back on the beach taking in the sunset and recounting his past success.

"Look Easy," like the rest of his new album, is a great reintroduction to Robin Thicke and a look at the artist he is now. Peep the lovely video when you press play and stick around after to stream On Earth, and in Heaven in full.


TAGS:  audio, robin thicke
Previous: iyla ‘Strings’ Us Along With Another Creative Visual Next: Mya Is Singing Our Love Language On ‘Forever My Love’ & ‘True Love’