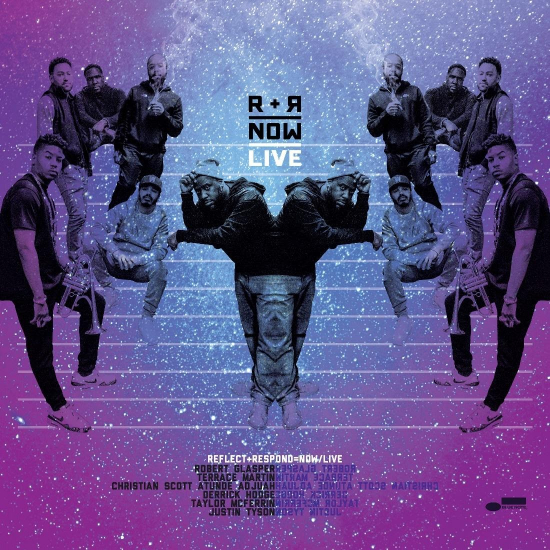 Typically, this would be the time of year when folks begin budgeting and planning ahead for concerts and music festivals. But as the masses await COVID-19 vaccinations and many parts of the world remain in partial lockdown, it's uncertain if/when/where live performances will be allowed to resume. While we long for the pandemic to end and venues to safely reopen, R+R=NOW provides the perfect stopgap with their new album R+R=NOW Live.

In October 2018, the dream-team collective of Robert Glasper on keys, Terrace Martin on synthesizer/vocoder/alto saxophone, Christian Scott aTunde Adjuah on trumpet, Derrick Hodge on bass, Taylor McFerrin on synthesizer, and Justin Tyson on drums, joined forces on stage for several nights during Glasper's month-long residency at NYC's Blue Note Jazz Club. Thankfully, someone had the foresight to record the extended jam sessions.

The recordings were whittled down to feature two new songs – a cover of Kendrick Lamar's "How Much A Dollar Cost" and "Perspectives/Postpartum" – plus five improvised performances of select tracks from their debut album Collagically Speaking. Aside from a guest appearance by Omari Hardwick on "Needed You Still," the focus remains on the gifted sextet and their unbelievable chemistry. Each musician gets their turn to shine, individually and communally. The end result evokes a feeling of being present, in person, to witness the greatness unfold.

Adjuah remarked on the specialness of that particular moment-in-time, saying, "Everyone in this band is a six-foot-tall black guy who didn't come from an affluent background,” says Adjuah. “In order for us all to make it into that room together, we've had to go through some hell, fight for some things, build up a lot of armor, and do a lot ourselves to forge our realities, to become who we are. We're all very aware of that, so anytime we get together, it's a celebration." We agree, and we love to see it.

R+R=NOW Live is available now via Blue Note and all major digital outlets. Preview the album below, then scroll down to peep a very candid (read: make sure the kids aren't around) interview with the group, facilitated by music legend and Blue Note president Don Was.