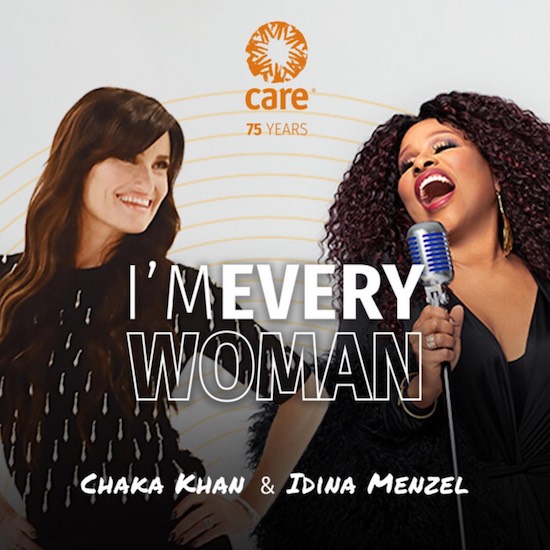 “I’m Every Woman” is one of Chaka Khan’s signature songs and has grown into a feminist anthem. The record has been covered by everyone from fellow legend Whitney Houston to, most recently, Tinashe. Now the song has gotten remade once again, this time by Ms. Khan herself who was joined by the voice of Elsa from Frozen, Idina Menzel, to celebrate International Women’s Day with non-profit organization CARE. While we’re a few days late for International Women’s Day, we’re celebrating women all March long, so we’re still right on time.

So what happens when the voice of “Let It Go” and the legendary Chaka Khan-Chaka Khan get together to rerecord an iconic classic? Well, you see, what had happened was...is that you get two singers having fun in the studio with each other, if nothing else. The recording uses the original's familiar production with Chaka and Idina trading off lyrics, some of which were switched up to fit it being turned into a duet for a cause. Overall, it feels more like a couple of old friends singing karaoke after a few too many free drinks at happy hour – except in this case you have two women who can actually blow.

CARE and the ladies also released a video with the duo that celebrates real women and girls around the world. The clip starts with a question posed by CARE: “What is every woman?” Over the familiar groove, women from many different walks of life – from celebrities to around the way girls – give answers like “powerful,” “free” and “ambitious.” A few faces you might recognize in the clip are Iman, Bellamy Young and Laverne Cox. Between scenes of each woman and girl in their everyday lives, we see Idina and Chaka in the studio together.

Will Chaka Khan and Idina Menzel’s remake of “I’m Every Woman” take the place of the original in our hearts, minds and playlists? In a word, nope. Will it change the world? Well, if it gets people to pay attention to CARE’s campaign to get people to send care packages to support women around the world, it just might. For more information about CARE and how you can get involved in their International Women's Day campaign, visit the CARE website.