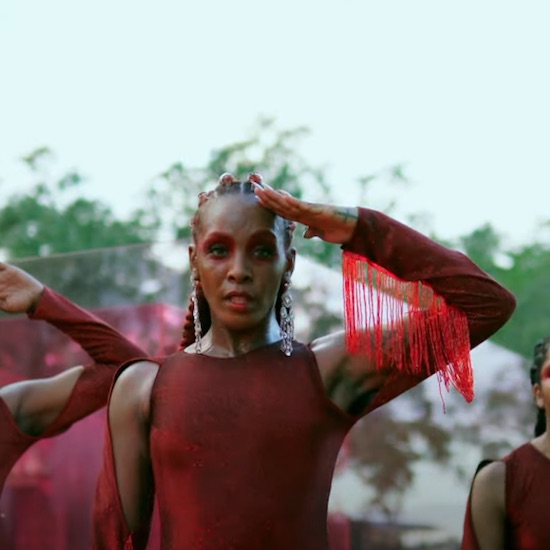 Ever since Dawn Richard stepped out on the scene solo dolo, she’s been a trailblazer of sound, dance and visuals. She'll continue stepping to the beat of her own drum on her next album Second Line, which is inspired by her New Orleans roots. You can hear her hometown's stamp all over her new track, “Pilot (a lude)."

“Pilot” is heavily inspired by New Orleans' bass-heavy bounce sound but with her twist the familiar sounds and vocal samples of the genre. As far as Dawn's vocals are concerned, she gives us a husky whisper as she not so humbly brags about being the leader of the pack. “I’m blowing spots, they calling me the bomb,” she cleverly flows. “Pilot (a lude)” comes with a short but sweet visual to match the brief track. In the clip, Dawn is flanked by two dancers all dressed in matching red leotards and boots. The trio executes energetic choreography in an everyday outdoor setting while geometric graphics splash on the screen. The clip is down to earth and out of this world at the same damn time, kinda like Dawn Richard herself.

“Pilot (a lude)” joins a long list of interludes that should have been whole songs from Dawn, including “Titans” and “Vines.” While we do wish that we got a little more of "Pilot," we don't doubt that Second Line will give us many more joints to bump and shake our rump to. Of the album, Dawn said it covers the journey of her persona King Creole, a Southern Black girl who comes to a fork in the road about her artistic career. In a press release, Richard also calls the project, “a movement to bring pioneering Black women in electronic music to the forefront.” We’re here for it, and the album will be here for us when it drops on April 30th.