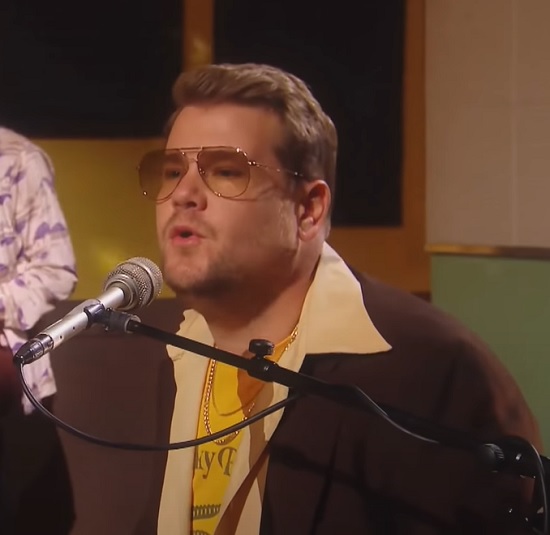 We're very hung up on Silk Sonic and their groovy retro sound. And with their debut single "Leave The Door Open" sitting pretty at the top of Billboard's Hot R&B Charts (and the No. 4 spot on the Hot 100), we imagine that we're not the only ones under their groove. That includes the folks over at The Late Late Show With James Corden. In fact, James Corden himself decided to borrow a bit of Bruno Mars and Anderson .Paak's swag to bring more eyes to his show with a clever parody titled "Leave The TV On."

The parody takes us into a 1970s-era recording studio similar to what we saw in Silk Sonic's music video. The band, which includes Corden's bandleader Reggie Watts playing the Anderson to his Bruno, is responsibly socially distanced but close enough to recreate the song's romantic sway as they try their best to persuade us to stay up late and catch their antics. Actually, they don't even request you to watch. Instead, they ask that you simply leave the TV on and don't touch that dial. "If you're gonna head up to bed / Could you leave the TV on," they croon. "If you wanna show us love / But you're trying to get some shut-eye tonight / You can leave the show on mute."

Their parody is right on time and downright hilarious. In fact, we might just give them a watch tonight (or at least DVR it — we're pretty serious about getting our doctor-recommended eight hours around these parts). Before you change that channel, let James Corden and Reggie Watts serenade you to sleep below.