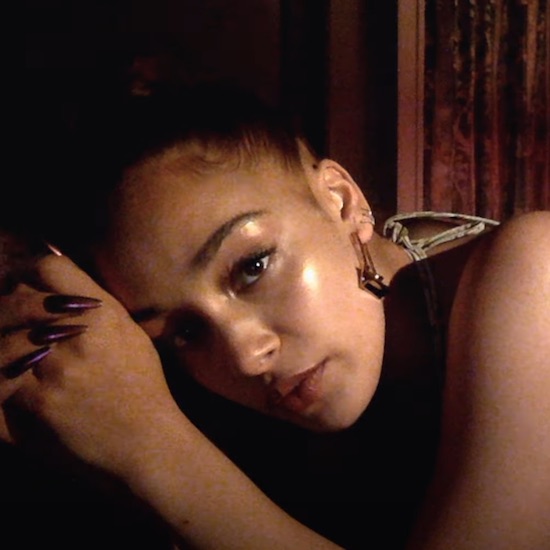 While we saw a good deal of Jorja Smith in 2020 — from her "Rose Rouge" cover to her Popcaan-featuring "Come Over" — we'll never complain about getting more music from the British singer. As if she sensed our demand, the artist hits us with some more new-new in the form of her latest single and visual "Addicted."

"Addicted" is all about wanting to be wanted by someone and not feeling the adulation you deserve. To capture that kind of vibe, the song's sound offers a brooding feel thanks to minimal production, jangly electric guitar and drum and bass percussion that set the mood. This all brings Jorja's vocal and the song's lyrics into proper focus. "What life are you living / It can’t really be real / Pushing over limits / You can’t even feel," she sings of the lopsided love affair in one of the verses. "Can we drink just not to care / Not care just to drink / Can't that be enough?"

Rather than brood in the video, which she self-directed alongside Savanah Leaf, she instead plays dress up to show her many sides. We watch her cavort in a number of outfits and hairstyles in the clip (which was shot on her webcam) as she sings the song directly to the camera. "The video is multiple versions of me singing the song, having fun dressing up, not trying to be too serious and just giving myself more freedom," the singer explained in a press release.

"Addicted" doesn't come with the fanfare of a new album announcement or any other landmark. However, if last year was any indication, we don't expect to have a shortage of output from Jorja Smith any time soon.


TAGS:  audio, jorja smith, Savanah Leaf
Previous: Rochelle Jordan Wants To Get ‘Next 2 You’ As She Prepares To ‘Play With The Changes’ Next: Tayla Parx Is Deliciously Petty In ‘Sad’