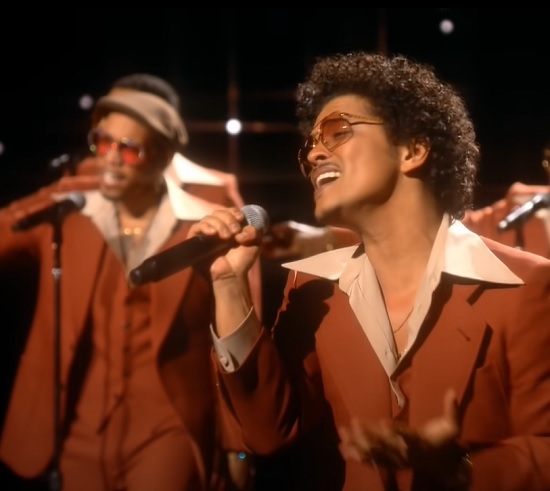 There were many memorable moments from last night's GRAMMY Awards, including monumental wins for Megan Thee Stallion, Beyoncé, H.E.R., Kaytranda and others. Performance-wise, though, we think it's safe to say that there was one performance that stood out from the rest. When Bruno Mars and Anderson .Paak took the stage for their first performance as duo Silk Sonic, they shut things down and gave a big reminder that R&B is surely alive and well with "Leave The Door Open."

Just like the song's sound and video, their performance was a throwback to the '70s complete with bell bottoms and butterfly collars. They even brought back the choreography of groups like The Temptations, with precise movements and effortless transitions between the lead vocalists throughout. Did it include the flash and pomp of the other performances? Not at all. Yet, it was still the most mesmerizing four minutes of the night's nearly four-hour telecast. When it came time for things to end, both fellas stepped out in front to flex their vocals, making sure that their performance ended on a very good note and leaving us hoping for much more.

We're still waiting on news about when we can get our hands on An Evening With Silk Sonic later this year. But we're more than happy to watch this performance on repeat until we get that information. Join us in our standom when you press play.


TAGS:  Anderson Paak, bruno mars", Silk Sonic
Previous: Givēon Digs Into the Past With Deluxe Album ‘When It’s All Said And Done…Take Time’ Next: Dawn Richard Keeps It Fly With ‘Pilot (a lude)’