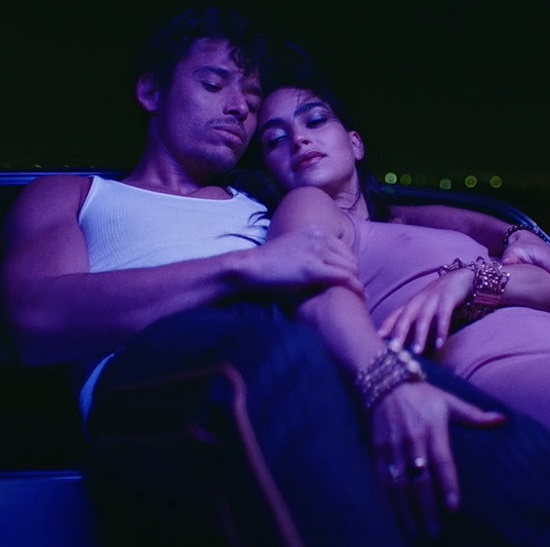 Is there anyone who will be busier this year than Anthony Ramos? We'd challenge you to find someone else with the actor/singer's hectic schedule. So far, he's been featured in Calvin Klein's Spring 2021 campaign (alongside the likes of current "it" girl Megan Thee Stallion). He also has a role in HBO's upcoming In Treatment reboot, and there's his leading turn in this summer's movie musical event In The Heights. As if he won't already be everywhere, Anthony is also returning to the music scene with an upcoming album. Before that's released, though, he's teasing what's to come with his new single and visual "Say Less."

The song is a sultry pop-R&B record on which the artist makes his intentions clear over an '80s-reminiscent, synth-driven groove. He's in the mood for seduction and says so with suggestive lyrics. "Baby, I'm calling now, I'm at your door / Open it, pull me in, do what you want," he sings. "Put it down like you nеver did before / Show mе how you never needed me more." The song's steamy mood is reflected in the visual, which taps his In The Heights co-star Melissa Barrera as his leading lady. Anthony proves his sex appeal with intimate scenes that demonstrate an explosive chemistry. The twosome gets close in scenes lit by red and purple light, making this affair look even more cinematic. It all comes to a climax that, while short, is without a doubt explosive.

"'Say Less' is a transition song into this darker world I am exploring in my music," Anthony said in a press release. "This video is a depiction of two people in a fleeting inferno of a relationship — one that can never be stable — but is too amazing to give up in spite of the inevitable outcome. They’re keeping a flame alive that will eventually burn out or explode. Not sure how it'll end up, but in the meantime 'Say Less.'"

Get into the latest on the music front from Anthony Ramos below, and be prepared to see a lot more of him before 2021 is done.