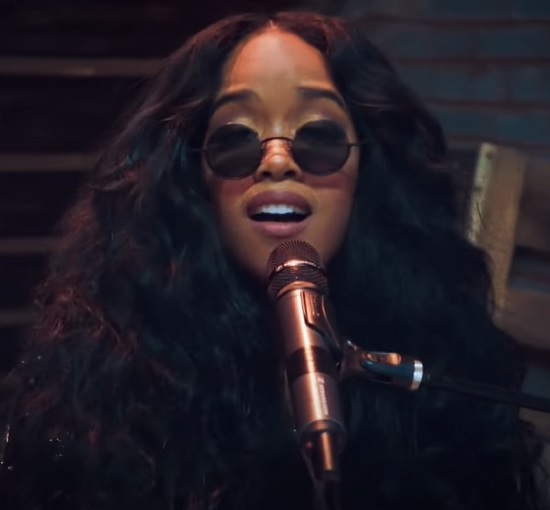 If you had an Oscar-nominated song, wouldn't you promote it every chance you got? That seems to be the case for H.E.R., whose track "Fight For You" is one of the songs vying for the Best Original Song statue when the Academy Awards air later this month. In the buildup to the awards show, it seems that the singer-songwriter is making sure that the fiery soul track is heard and we don't blame her. The latest stop on the promo tour was on The Tonight Show Starring Jimmy Fallon.

Being that this is still the quarantine, H.E.R. wasn't at Studio 6B to perform the track. But she did provide a lively pre-taped performance that showed off her skills. She starts the set seated at the drums as she beats out the track's rhythm while singing the song's initial verse. She's soon up on her feet, though, as she walks into the room with the rest of her band while flanked by her backing vocalists. The performance takes off from there, as she gets more energetic while standing on tables and cutting a few steps while singing out for freedom and against the injustice that we all still somehow face today.

While there were no major showstopping moments here, H.E.R.'s performance of "Fight For You" is very much so worth watching and makes us wonder what she'll do when she takes the Oscars stage on April 25th.