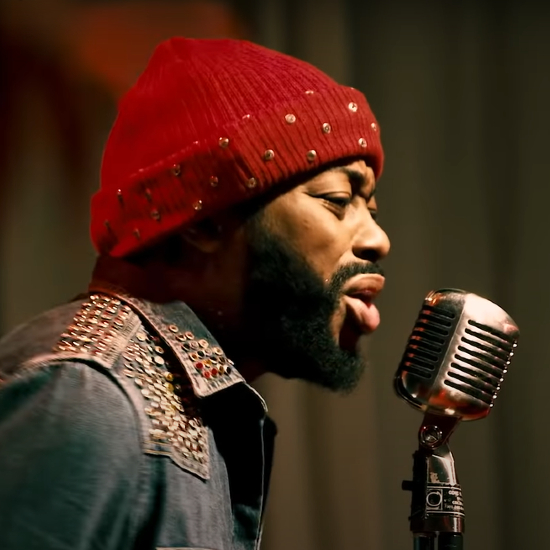 Today, April 2, 2021, would have been Marvin Gaye's 82nd birthday had he lived to see the day. The legend may be gone, but he's far from forgotten with his song “What’s Going On” as relevant today as it was when it was released almost 50 years ago. Raheem DeVaughn paid musical tribute to Gaye when he recorded “Marvin Used To Say” in 2020 when there was a whole lot going on. Now we have a video to complement his powerful ballad and continue his homage to the soul star. "This time-period piece of visual art is a tribute to the musical icon & legend Marvin Gaye,” said DeVaughn.

The Adebayo Umoja-directed video for “Marvin Used To Say” features a throwback performance inspired by the groovy 1970s. Flanked by his band and three female background singers (we see you Alison Carney!) all rocking their finest '70s threads and wigs, Raheem is decked out in a bedazzled red knit cap and blue jeans outfit inspired by Marvin’s lewk from his 1974 live album cover. Umoja doesn't keep his lens only on this throwback scene, as we see black-and-white photos of the 2020 riots flash across the screen. Towards the end of the clip, Raheem shouts out a few individuals doing the work of making America a better place for Black people, including Angela Rye, David Banner and many others, as footage of the revolutionaries is displayed. The visual ends with everyone on stage throwing up a Black power fist while a voiceover of Tamika D. Mallory’s infamous speech during the George Floyd protest plays.

“Marvin Used To Say” comes from Raheem DeVaughn’s latest album, What A Time to Be In Love. DeVaughn isn’t done yet celebrating the artistry of Marvin Gaye, with plans to release an entire album honoring the “Let’s Get It On” singer. That is a tall order, but we have no doubt that the Love King will impress.