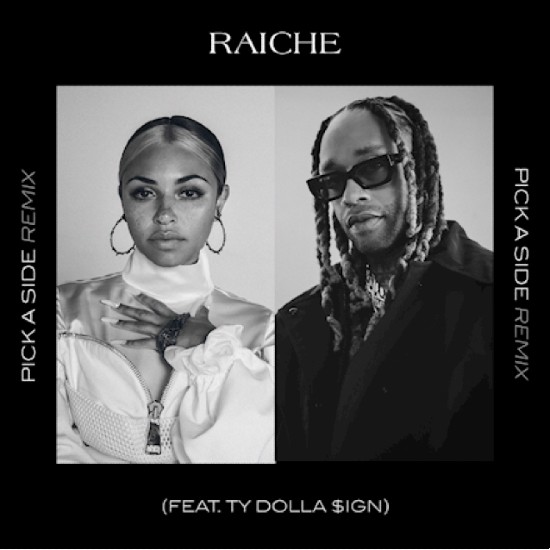 Still reeling from the success of her 2020 single “Pick A Side,” singer-songwriter Raiche is adamant about taking the all-or-nothing anthem all the way to the top. In addition to a sultry, in-studio performance video, which earned the Massachusetts-raised maven the title of YouTube’s Artist On The Rise Trending, she also tapped fellow labelmate and favored feature Ty Dolla $ign to elevate the track as only he can. In addition to the male perspective, his trademark touch adds a certain something to the single and we are here for it. Apparently, we're not alone, as the single has already amassed over 850K streams and Raiche's goal of a million is well-within reach.

Over the original Menardini “Bridgetown” Timothee-produced track, the duo takes turns telling their side of the story. While Raiche details the inconsistency of her deceitful lover, Ty calls his lady’s integrity into question. He wonders if her infatuation lies with him or his fame as he sings, “When you think of Mr. Right, do you picture me? / Or do you only f**k with me for the publicity?” ‎Regardless of her answer, it seems his enchantress has him right where she wants him, as Dolla is conflicted and powerless against her seduction.

Give Raiche’s remix of “Pick A Side” featuring Ty Dolla $ign a spin, and be sure to add the track to your collection from your preferred digital platform. Along with the promise of new music soon, her social media feed has treated fans to candid studio pics suggesting she’s hard at work with the likes of GRAMMY-winning producer Troy Taylor and the members of Jagged Edge. With her talent and proven hitmakers on her side, Raiche's much-anticipated debut album promises to be one for the books.