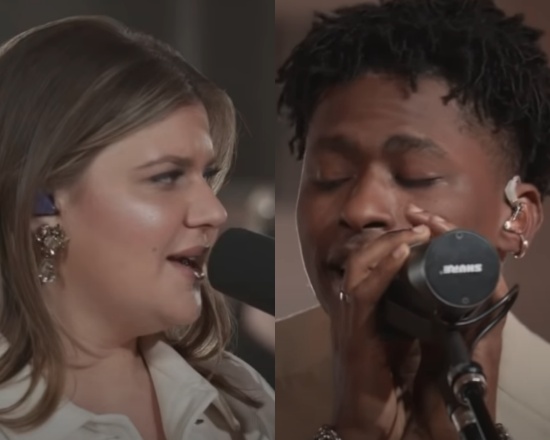 Lucky Daye gave us a Valentine's Day gift that has kept on giving when he released his EP Table For Two in February. The EP filled with all duets with women has not left heavy rotation since it dropped, and the song that has gotten the most play here at SBHQ is "How Much Can A Heart Take" featuring GRAMMY Award-winning songstress Yebba. After dropping a comical lyric video back in March, the soulful pair are continuing to promote the single with a recent performance on Jimmy Kimmel Live!.

Filmed at what appears to be a church by the look of the pipe organ on the wall above them, Lucky and Yebba are front and center while everyone in the band (including Academy Award-winning producer D'Mile on bass) is socially distanced behind them on stage. The distance separating the two singers plays well given the lovelorn theme of the song. Yebba handles the first verse and cracks a bit of a smile before getting serious and laying her heart on the line. Lucky, meanwhile, stays in character the whole time. They sound amazing individually and when they come together to harmonize and ad-lib later in the performance.

Although "How Much Can A Heart Take" is a song about heartache, we can't help but love everything about Lucky Daye and Yebba performing it live. Now that outside and venues are opening back up, our fingers are crossed that we'll get the chance to see this magic in person soon. Until then, watching this on repeat is the next best thing.