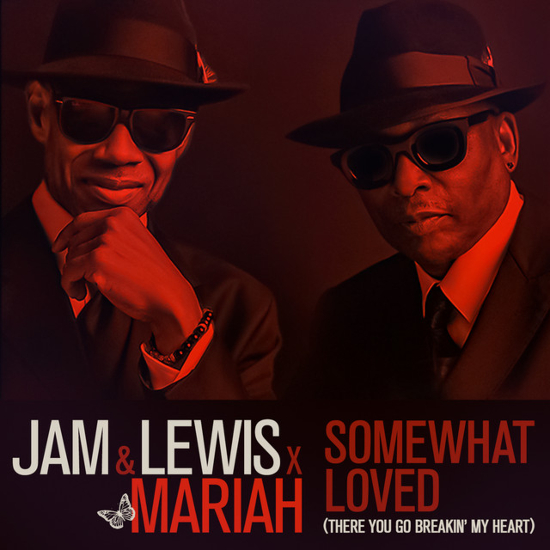 Legendary songwriting/production duo Jimmy Jam & Terry Lewis shocked and surprised fans when they first announced that they'd be releasing a debut album. Since then, we've been eagerly anticipating the premiere of the compilation project, which promises mega collaborations and original music across multiple genres. After reuniting with Sounds of Blackness for "Til I Found You" and teaming with fellow hitmaker Babyface on "He Don't Know Nothin' Bout It," Jam & Lewis are back with a new single, featuring yet another icon. Mariah Carey lends her signature vocals to "Somewhat Loved (There You Go Breakin' My Heart)."

The Flyte Tyme founders and Mimi go way back, having worked together on Carey's albums, Rainbow, Glitter and Charmbracelet. "Somewhat Loved" is a pleasant R&B/pop hybrid that recaptures the magic of their previous fan-favorite tunes. The crisp production reaches back to '90s with an infectious, piano-driven arrangement that leaves room for the vocal butterfly to soulfully glide and flutter throughout the track. The Frank Gryner-directed lyric video provides further nostalgia, paying homage to some of Mariah's most popular videos, including "Dreamlover," "Fantasy" and "Honey."

In speaking of the musical reunion via press, Jam & Lewis shared, "we put a wishlist together of all our favorite artists. The chance to reunite with our friend and fellow Songwriters Hall of Fame partner Mariah was wishlist fulfillment at its finest." MC echoed the sentiment in her own statement, saying, "Working with Jimmy & Terry through the years has been one of the greatest creative journeys I've ever taken. It's a great honor for me to participate in this once-in-a-lifetime album!"

Check out "Somewhat Loved (There You Go Breakin' My Heart)" below and pre-order Jam & Lewis: Volume One ahead of its scheduled July 9th release.