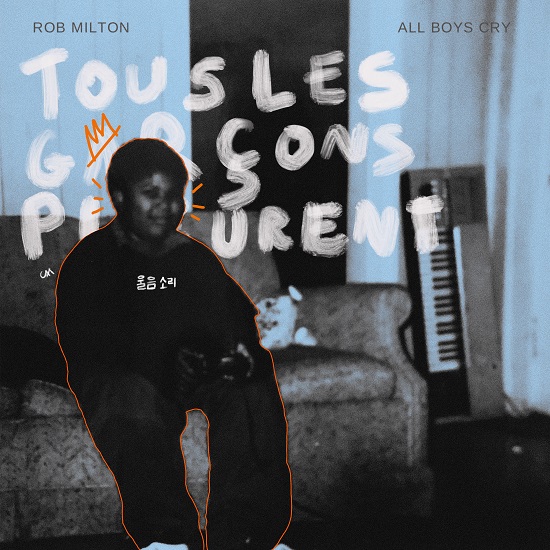 Male emotion isn't something that's encouraged in our society. That's especially true in relationships, where men can feel like they're both expected to put up a strong front and called weak if they let their true feelings show. Thankfully, many men today are challenging these notions. In fact, Rob Milton has composed a whole album to tackle the concept. All Boys Cry finds him being quite expressive about the raw, honest feelings men have while traversing love and relationships.

Rob first put us on what the album would be about when he dropped lead single "Cry" and follow up "You Know It." Those two tracks show two opposite sides of love, with "Cry" contemplating the loss of love and "You Know It" centering on the rush of falling. The rest of the album fills in the full range between the two feelings. Rob turns to Dana "Big Dane" Johnson for production duties throughout, and the producer channels many different styles while helping the singer get his feelings out.

The production helps create interesting textures, especially as Rob touches on falling fast with "Touched Heaven" and the overwhelming feeling love can leave you with on the rock-tinged "Drown." The more straightforward "PWM" is the one that many will gravitate to as Rob gets aggressive while addressing an emotional manipulator. His warnings not to play with his feelings are bolstered by a closing verse from rapper DDm.

The album goes into interesting territory at the midway point, with the stylistic differences becoming more noticeable. "Unimpressed" goes beatnik soul with a loop of upright bass and Rob's delivery going more spoken word as he wonders why his love is so ho-hum about him. Most surprising here, though, is an unexpected (and almost unrecognizable) cover of 702's "I Still Love You." The cover removes the space-age production and rearranges lyrics and delivery, creating a melancholy tale of regret and hope for a second chance at love. The second half isn't all gloomy, though, as he ends on the upbeat "Thank You," with him singing along to a bouncy synth groove as he offers thanks to the man above despite it all.

Rob Milton is taking risks on All Boys Cry and, for the most part, they pay off. If nothing else, this bold statement is one that deserves a listen or three.