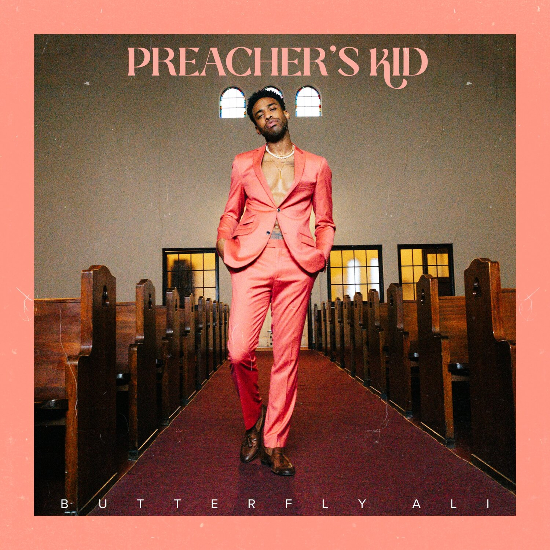 Having had roles in major TV shows like The Rookie, Pretty Little Liars and Glee, actor Titus Makin Jr. is no stranger to the spotlight. Lesser known, however, is his musical alter ego, Butterfly Ali – a fact we suspect will soon change with the release of his debut EP Preacher's Kid.

To be clear, this isn't his first foray into music. He initially dipped his toes into the water under his real name before switching lanes in 2019. After dropping singles, "Rose," "Righteous," "Listen To Me" and "5 Minutes," the singer-songwriter felt the time was right to deliver a proper collection.

"It’s been a long time coming," he explains, "and a lot of soul searching to find my voice. I had to figure out what was important to me to sing about. I came up with this EP title by truly trying to find a description for who I am and my body of work. The best name I could come up with is exactly the truth of who I am, a preacher’s kid. I was raised in the church and brought up with so many wonderful morals/lessons of love from my father, who has been a preacher the majority of my life. ”

This acknowledgment informs the overall tone and timbre of the album as musical arrangements fuse rock, funk and soul with a distinct gospel flair. Song titles like "Testimony" and "Pray For 'Em" pay homage to his religious upbringing and at times, even his vocal delivery is reminiscent of a lively preacher. But even though he can squall with the best of them, Butterfly Ali isn't all about church. In fact, he's a musical chameleon of sorts, able to growl in his lower register, shatter glass with his piercing falsetto and rap with the swagger of a flamboyant emcee.

Considering his stage name and eponymous theme song were inspired by iconic boxer/activist Muhammad Ali ("Float like a butterfly..."), his larger-than-life approach to music should come as no surprise. Even when he reigns it in on the smooth and mellow warning, "Truth Is," he's still undeniably magnetic. As he confidently declares in his song "Ain't Ready For Me," "Just ain't right how good I am." Can we get an "Amen!" somebody?

We're certainly hoping there's more new music coming down the pike. In the meantime, visit your favorite DSP to purchase Preacher's Kid, then scroll down to peep the visuals for "Ain't Ready For Me."