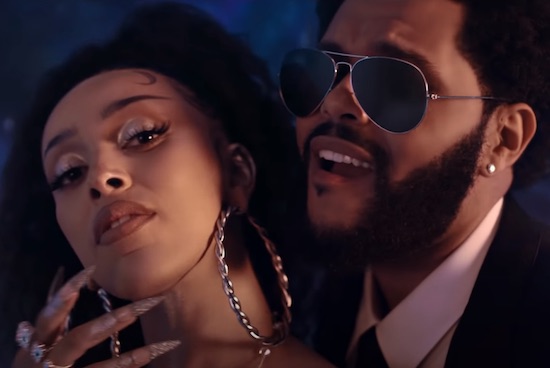 With the release of her new album Planet Her, it's looking like it's Doja Cat’s world and we’re just living in it. It's no surprise that the project is getting a lot of play and critical acclaim since it dropped last Friday. Prior to that, she got the party started with the SZA-featuring “Kiss Me More” and followed that up with “Need To Know.” Her current single is the heavily teased track “You Right” featuring The Weeknd.

Originally slated to appear on a different track on the album, The Weeknd wanted to be featured on “You Right” after hearing it. We can't blame him because the song is a catchy bop. Doja Cat is ready to risk it all for a new boo on "You Right." Our girl fantasizes about stepping out on the chorus, singing, “I got a man but I want you / I got a man but I want you / And it’s just nerves / It's just d**k / Makin’ me think ‘bout someone new.” The Weeknd isn't making it easy for her, enticing Doja with lyrics like, "But this sex will cloud your memory / A couple strokes to put it then you’ll belong to me," during his verse. Doja Cat indulges in her R&B/pop vocals for the track, singing for the whole song and riding the beat with her usual charisma and bravado. The Weeknd plays well off of her, returning Doja's desire with some slick talk of his own, but ultimately it’s her time to shine.

The video for “You Right” continues with the otherworldy themes of Planet Her's previous visuals. This time, Doja portrays a Greek goddess (possibly Dike) weighing the decision to leave her lover. She’s in her Libra bag heavy, with her Libra symbol hairstyle, scales and use of popular zodiac app The Pattern. The Weeknd gives us his portrayal of another Greek god (possibly Poseidon) and rains on Doja and her lover’s parade. Ultimately, Doja chooses to follow her heart, but it's not all sunshine and rainbows. See what's in the stars for Doja, her man and her side dude when you press play.