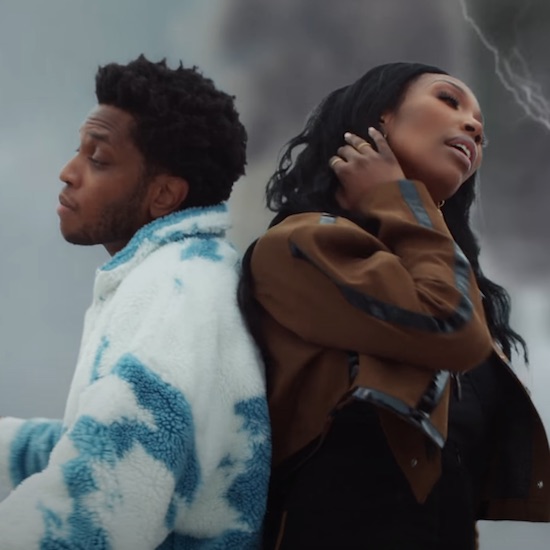 Ever since he dropped his most recent EP Neptune, fans and music lovers alike fell in love with Gallant all over again. But if you asked them what the clear standout on the project was, there would be one clear answer: "Dynamite." The song, a duet between Gallant and Brandy, shows off the pair's undeniable musical chemistry while also contributing a timeless ballad to the culture (and, let's face it, there aren't a lot of those these days). Now the twosome is putting push behind the potential hit by giving it a well-deserved and lovely visual.

The video treatment focuses on each artist separately, with Gallant standing on a rooftop wearing a fuzzy sweatsuit that mirrors the sky. A hazy sky and a panoramic shot reveal things aren't what they initially seem, though, as the world seems to be falling apart around him. We then see Brandy getting beautified while a volcano erupts in the distance and rescue helicopters rush to the scene. When the two finally meet on the rooftop, smoke billows, buildings are ablaze and destruction is imminent. Despite all that, the two seem to be oblivious to what's going on, instead singing their hearts out for the song's big finish.

"Dynamite" is one of those rare duets that could stand the test of time (and, according to the video, an apocalypse). If you haven't heard it yet, peep the song's visual below. And if you have, go ahead and listen one more time as you watch Gallant and Brandy in the wondrously cinematic clip.


TAGS:  brandy, Gallant
Previous: Kem & Wiz Khalifa Can Handle The Truth On The ‘Lie To Me’ Remix Next: Adekunle Gold & Lucky Daye Make Us Want To Be A ‘Sinner’