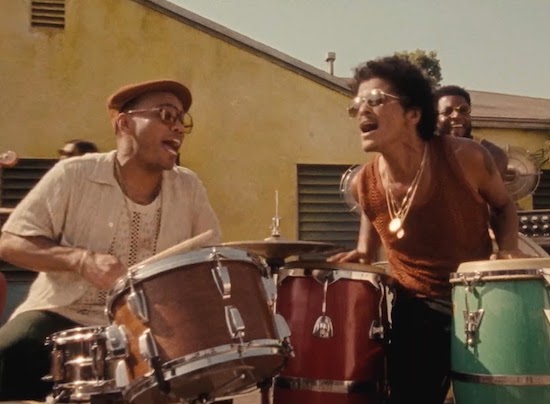 We fell in love with Silk Sonic the minute they dropped their introductory track "Leave The Door Open." The smooth slice of '70s-inspired soul was just what we needed in the sea of insincere R&B that has dominated the mainstream. That was more than four months ago, though, and our doors have been open for a very, very long time with no sign of new music from the duo. Bruno Mars and Anderson .Paak were happy to fan the flames and tease us with performances and promises of more, but now they're finally delivering with Silk Sonic's second single "Skate."

The sound of skate finds the duo still playing in '70s soul, though this jam moves the needle a few years in sound with a slight disco feel. That's fitting since the song taps into the roller disco fad that was big at the time. "Oh, skate to me, baby / Slide your way on over," Bruno sings on the chorus. "Oh, skate to me, baby / I wanna get to know ya." AP, meanwhile, plays a similar role as he did on "Leave The Door Open" as he talks to a pretty young thing that's caught his eye and drops pick-up lines ("In a room full of dimes / You would be a hundred dollars") that would make any old player proud. These lyrics are couched in a sound bed of strings, horns, live percussion and rhythm guitar that makes it sound timeless.

In the video, they take a very similar approach to "Leave The Door Open" as the fellas and their band once again serenade a group of lovely ladies. This time, however, they've moved out of the studio onto a sunny street in what looks to be a tropical locale (but could also easily be a backlot in LA). The ladies also take a cue from the song and skate around the fellas while wearing hot pants and rompers. It makes for a fun watch while also increasing our expectation that each new Silk Sonic track will come with a sweet visual attached.

No, we don't know when An Evening With Silk Sonic will actually be released or what will come next from the talented twosome of Mr. Mars and Mr. Paak. What we do know, though, is they have another jam on their hands. Get in on the fun when you check out a stream of "Skate" and its video below.