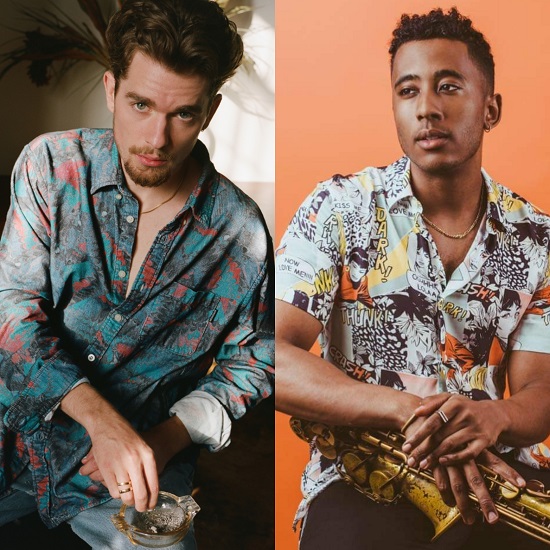 Trumpeter and vocalist Tony Glausi has garnered acclaim for his talents throughout his career. He's now ready to begin another chapter with the upcoming release of his newest set Everything At Once." The set will see him following in steps of greats such as Herb Alpert by incorporating elements of pop and R&B into his work. Previous singles "Jada Jada" and "Lot Of Enough" have given a preview of what's to come and SoulBounce brings you the first listen of the set's next release "The Ominous Blue," which features one of our faves Braxton Cook.

"The Ominous Blue" has a smoky, coffeehouse kind of vibe reminiscent of late '90s and early '00s neo-soul. That feel is thanks in part to a jazzy arrangement that includes Braxton on flute and sax and Tony on keys and trumpet. But the fellas aren't just providing the instrumentals, they also flex their vocal skills. Braxton takes the poetic chorus, on which he sings, "The ominous blue / What does it mean to you? / That velvet hue / The things it makes me do." Tony, meanwhile, offers a spoken-word style rap that tucks into the swing and sway of the song's rhythm. He speaks on meeting a pretty young thing and then sliding with her for a night they won't forget.

"I wrote this song about the distinct feeling of being faded and leaving the club with a girl I've been vibing with," Tony says about the track. "We come up out into the city again with all of its energy, bright lights and the blur of crossing the Williamsburg Bridge in a taxi back to Brooklyn. From there, it's an after-hours hang on the roof, another drink, a smoke and making love under the dark blue sky."

Everything At Once is set to be released on September 3rd and will feature a bevy of guests — including Braxton, Max Milner, Elysse, Luca Max and Charlemagne The Goddess. Check out our exclusive stream of "The Ominous Blue" below and keep abreast of all things Tony Glausi by following him on Facebook, Instagram and Twitter.


TAGS:  audio, Braxton Cook, Tony Glausi
Previous: Mariah The Scientist Invites Us Into Her ‘RY RY WORLD’ & Is On The Run In ‘Aura’ Next: Adeline & Joshua J Serve Sexy Summer Vibes On ‘Eternity’