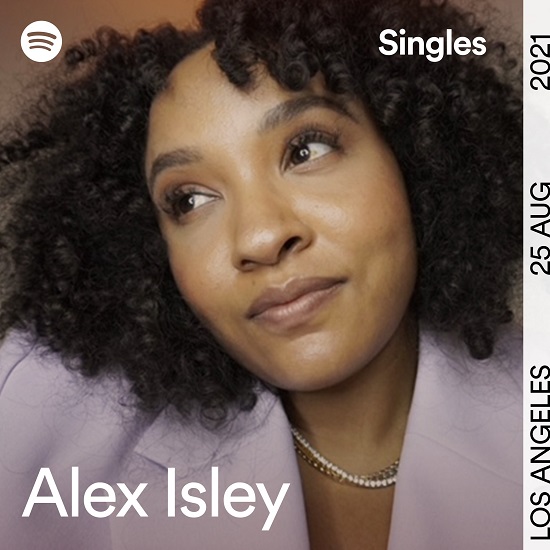 Alex Isley is an artist in a unique position. At 34, she's a solid millennial who grew up in the '90s and got to experience the golden age of hip-hop and the R&B sound that remains an inspiration to Gen Z musicians. She also happens to be the daughter of Ernie Isley, the legendary musician and member of iconic soul outfit The Isley Brothers. So it's kind of a no-brainer that Spotify tapped her to be part of their Spotify Singles campaign in tribute to Aaliyah with her take on "At Your Best (You Are Love)."

For those not in the know, the song was originally created by the Isleys for their 1976 album Harvest For The World. It was later covered by Aaliyah on her debut album and eventually became one of the late singer's signature hits. Alex's pedigree and her exceptional talent make her a genius choice to take on this task and she does so gorgeously. She starts the song by adding even more lushness with an a cappella opening which features fluttering vocals and crystalline notes. She then gets to the soul of the matter with acoustic guitar, snaps and a subtle kick drum as backing. The stripped-down take taps into the song's raw emotion and the simple beauty of the longing lyrics. As more instruments are added softly to the mix, Alex still makes sure that the loving sentiment shines through.

Her take on the song definitely reminds us of Aaliyah's sweetness and The Isley Brothers' romantic smoothness. Leave it to Alex Isley, however, to make this beloved classic all her own. From the feather-soft vocal flourishes to her small musical choices that make a difference, her take is enough to have us spellbound all over again.

Listen to Alex's take on a cross-generational classic when you press play.