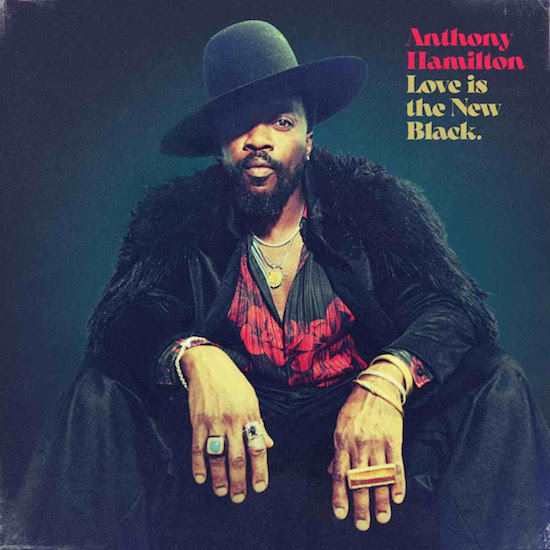 Soul man Anthony Hamilton has kept us thoroughly entertained throughout the pandemic with his singles "Back Together" featuring Rick James, "Mercy" featuring Tamika D. Mallory and his most recent, "You Made A Fool Of Me," which featured the original "Charlene" music video actress in the dramatic visual. He has made it clear all along that all of this new music was in preparation for his next album, and we've seen him numerous times in the studio hard at work with Jermaine Dupri and other producers and musicians crafting the project but he's kept additional details under wraps – until now, that is. Anthony Hamilton has proudly announced that his tenth studio album is entitled Love Is The New Black. and unveiled the cover art, tracklist, release date and title track.

For his first album in five years, AHam is flawlessly styled on the 1970's throwback-leaning cover in a black and red ensemble accented by a furry coat and his hat cocked to the side in true '70s player fashion. According to the tracklist, Love Is The New Black. will be filled with 14 soul-drenched songs and has an impressive list of guest artists. We'll get to hear him duet with Jennifer Hudson on the track "Superstar" while Rick Ross and Lil Jon add a little hip hop to his soul on the songs "Real Love" and "I'm Ready." Previously released singles "Mercy" and "You Made A Fool Of Me" are included, but "Back Together" unfortunately didn't make the cut.

The first song that you'll hear when you play Love Is The New Black. is the title track, which Anthony added to streaming platforms to accompany the project's announcement. "Love Is The New Black." serves as an introduction or interlude of sorts, with the song being comprised of only a chorus and no verses. "I know where I'm going / You know where it's at / One thing that's for sure / Love is the new Black," he repeats throughout the cut. What it lacks in lyrics and substance, though, Hamilton makes up for with his soulful crooning and harmonizing with the female backing vocalist.

Originally having a more socio-political theme, Hamilton decided to switch gears to create an album that covered a range of human emotions. We look forward to hearing what else he has in store for fans when Love Is The New Black. drops. Clear your calendars for the album's release on Anthony's My Music Box label in association with BMG on Friday, September 24th.