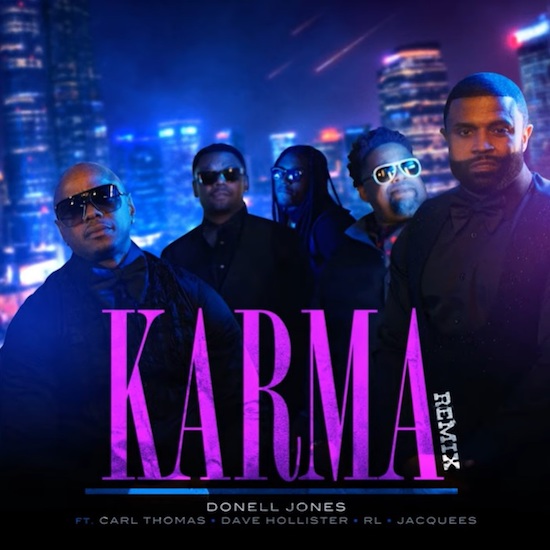 R&B fans let out a collective gleeful scream a few weeks ago when news broke that Donell Jones, Carl Thomas and Dave Hollister formed a new supergroup named The Chi. In case you're curious about what the new trio might sound like when they drop their highly anticipated debut, you can get somewhat of a preview on the remix to Donell's recent single "Karma" that features the trio alongside fellow '90s R&B alum RL and self-proclaimed King of R&B Jacquees.

We had a sneaking suspicion that something was in the works when we peeped Carl, RL and Jacquees guest-starring in the "Karma" music video when it dropped in March. The fellas brought their swag to the visual and do the same to "Karma (Remix)." Written and produced by RL, the four legends take turns singing the remix's revamped lyrics over a brand new sound bed of piano, synths and programmed drums. Donell, Carl, Dave and RL all sound amazing with seamless transitions from one voice to the next and tight harmonies. Jacquees doesn't appear until later in the track on the bridge, and he actually does a pretty good job hanging with some real R&B royalty.

Donell recently broke down how the remix came to be in a photo caption on Facebook and Instagram. "When RL told me he was gone make a remix I got excited but when I heard it I was like this is epic. I immediately got an idea to do something special that hasn’t been done like this before. So I called Carl Thomas and Dave Hollister and asked would they jump on this joint and without hesitation they agreed, but I didn’t stop there I felt like I wanted to show how much love I have for the younger generation so I asked my lil brother Jacquees would he jump on it and he agreed with no hesitation," Jones recalled. "I must say the way RL put this song together made it really easy for us to do our thing without singing all over each other...this is history being made because there’s no ego just all love and it shows in this pic and on record...I LOVE YOU BROTHERS," he concluded the caption that accompanied a photograph of all five men smiling and having a good time.

If this is a preview of what we can expect when Donell, Carl and Dave are ready to fully unveil The Chi, our ears and bodies are ready. And if they add RL into the mix on songwriting, production and background vocals, just take all of our money now. While we wait to see what the future holds for The Chi, listen to "Karma (Remix)" right here and stay tuned for the track's forthcoming music video.