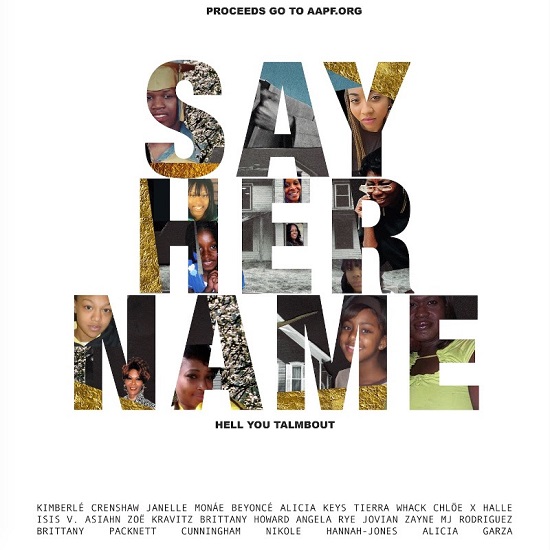 While Janelle Monáe is known for making us move with her futuristic brand of soul, she's just as known for advocating for change and justice. One of her finer moments came in 2015, when she reworked her track "Hell You Talmbout" into an anthem speaking out against police brutality. Six years later, she's revisiting it once again to bring attention to the often-ignored Black women taken far too soon by the same violent epidemic with "Say Her Name (Hell You Talmbout)."

Janelle stretches the song into 17 minutes and invites a few of her notable friends — including Beyoncé, Alicia Keys, Brittany Howard, Angela Rye, Tierra Whack, Zoe Kravitz, Nikole Hannah-Jones, Chloe x Halle and more — to lend their voices to this effort. Each woman takes turns repeating the names of three victims, making sure that their names will be said for years to come. When they aren't shouting the names of our fallen sisters to the rafters, the song's chorus lets us know that these names and reforms are exactly what we should be talking about.

"Say Her Name (Hell You Talmbout)" was released in conjunction with African American Policy Forum (AAPF), a think tank focused on transforming public discourse and policy on race and social justice concerns. Proceeds from the single, which is part of the organization's "Say Her Name" campaign, will go to AAPF. You can purchase the single from your preferred retailer to help or donate directly to the organization. Get into the defiant anthem via the lyric video below.