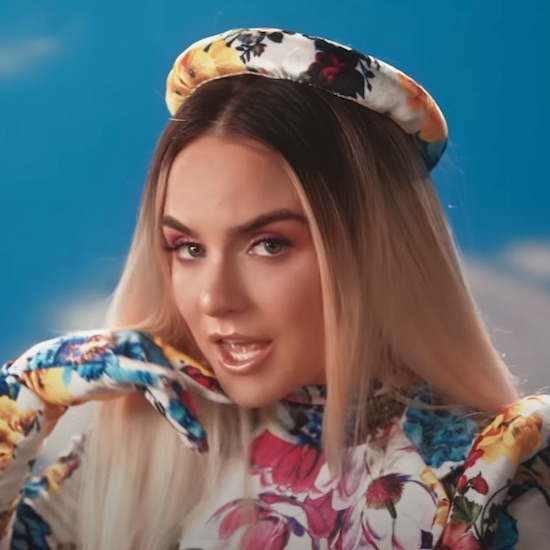 JoJo's latest release, the capsule project trying not to think about it, chronicles her struggles with mental health over the past year. The subject matter is heavy, and she dives right into baring her soul on her first single, “...Anxiety (Burlinda’s Theme).”

Burlinda is JoJo's nickname for her depression and anxiety, which she personifies throughout the song. "That bitch" (JoJo's words, not ours) is making her feel some kind of way, and, worse yet, she doesn’t feel in control because Burlinda's keeping her on edge. “You drain me (drain me), drain me / All you do is try to change me (change me) lately / And if I could choose / It would be me without you,” she sings on the chorus. We feel JoJo’s pain over a mid-tempo groove of bass guitar, synths and some layered harmonies.

The music video for “...Anxiety (Burlinda’s Theme)” has some fun with the theme, with JoJo playing an actor in a commercial for the anxiety medication "trynesta." It has all the cliches from the prescription drug commercials, including JoJo tossing and turning in bed at night, frolicking in a field of flowers, going out on a date and talking to a therapist. Director Alfredo Flores added a few touches for comic relief (the laundry list of side effects at the end is a gag), and cameos by Omarion and Lauren Jauregui make this really fun to watch.

“...Anxiety (Burlinda’s Theme)” is one of many highlights from trying not to think about it. The project contains 12 tracks detailing her emotional highs and lows with no features, just 100% JoJo. The EP follows 2020’s good to know, the release of which actually triggered her depression and anxiety.

A landmark project for JoJo, she co-wrote and produced good to know and released it on her own label. Unfortunately, it dropped early in the pandemic, and JoJo had to cancel her tour and much of the promotion of the album. Critically acclaimed, the project didn’t live up to her expectations, and she took the disappointment hard. On top of that, she had just ended a longtime “situationship.” All these negative thoughts and feelings were the basis for trying not to think about it and exploring her struggle with mental health – something she admitted she was still struggling with a month ago. We applaud JoJo for not only fighting the good fight but sharing it with her fans and inspiring us in the process.

JoJo trying not to think about it [Amazon][Apple Music]