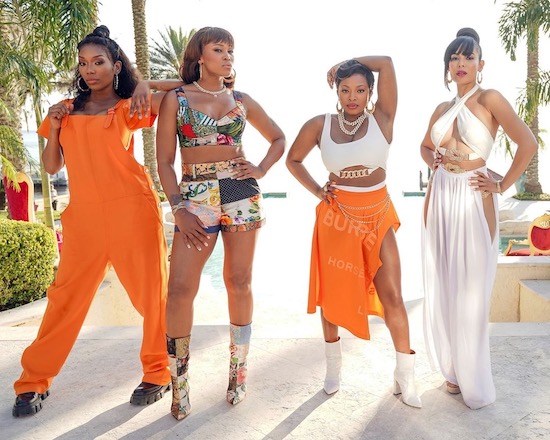 The late 1990s was a heyday for hip-hop. It was a time when the genre was perhaps its flashiest and most over the top. It's also when the fictional hip-hop group of ABC's Queens had their biggest hit. As the premiere date for the show nears, the series releases its first (and, perhaps, not last) single from the cast with "Nasty Girl" along with an era-accurate music video.

First things first, these are some Nasty B*tches. No, seriously, that's the name of the aforementioned fictional group. But it's also the theme of "Nasty Girl" as each lady spits about their sexual prowess over the beat (appropriately made by Swizz Beatz — the show's executive music producer — and Avery "Avenue Beatz" Chambliss). Eve, right at home on the track, kicks things off as Professor Sex as she gets raunchy on the track with rhymes reminiscent of her time as the first lady of Ruff Ryders Entertainment. After her expertise, we're treated to Naturi Naughton's Jill Da Thrill, who channels Lil Kim as she incorporates religious references alluding to her character's evolution. Next up is Nadine Velazquez, whose Butter Pecan raps all about material things rather than sex. Bringing up the rear is Brandy's Xplicit Lyrics, who lives up to her name. Not only does she have the hardest flow on the track, but brings an energy similar to Da Brat to balance out the rest of the ladies.

The Tim Story-directed video is straight out of 1999, featuring all of the clichés of the time — including shiny outfits, a lavish mansion (that gets set on CGI fire), Jet-Skis, champagne and scenes on a yacht for no apparent reason. The only thing it's missing is the random appearance from their famous friends. But with Cam'ron and Jadakiss set to take part in the show, we're sure they'll more than make up for that.

It's obvious that the folks behind the show have been doing their homework and this one is sure to be must-see TV. Queens is set to premiere on October 19th at 10 p.m. EDT/9 p.m. CDT on ABC. Check out a stream of "Nasty Girl" and its video below.