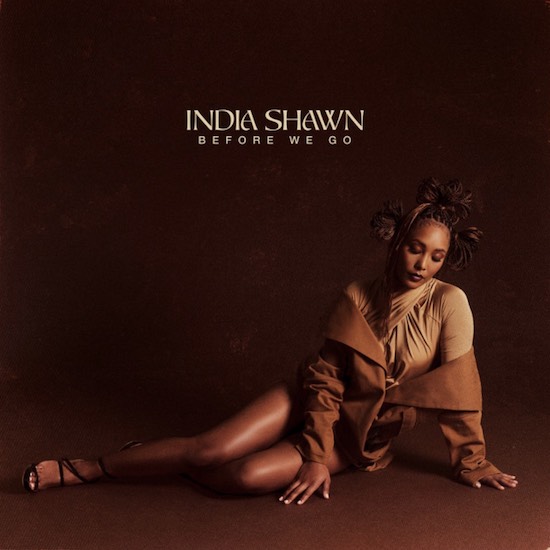 For her official major label debut, California soul staple India Shawn couldn’t have chosen better timing. Coming off of having her song “MOVIN’ ON” featured on episode 2 of this final season of Insecure and boasting the majority production by executive producer D’Mile – the same man behind Silk Sonic’s newly released album An Evening With Silk Sonic – what a time this is for India Shawn! The singer-songwriter chose to give listeners a mix of the familiar and the brand new with some optimism and a little cynicism and to bring some friends along for the ride on her Epic Records EP, BEFORE WE GO.

India Shawn's last 5 singles find a home on BEFORE WE GO, but they all get new life when heard in sequence from the minute the very first song, “CALI LOVE,” makes its creative point about, “Searching for water where it never rains,” and begs the question, “Can you find a true love in LA?” Giving you the first hints of cynicism matched by the melancholy chords, from this opener alone you get an idea of the potency of Shawn’s songwriting and why her name has traveled on the R&B scene alongside some of your favorites.

Her popular summer single “DON’T PLAY WITH MY HEART” follows and takes things up several notches into more playfully cynical territory. D'Mile’s muted bass-led, bouncy funk groove has gotten disco comparisons since dropping this August, but it feels fresh, young and like it was made just in time to get played in LA’s DiscOasis skating rink pop-up before its final week. This underscores an element present throughout the EP: The Soul. The secret weapon tying together the previously released songs that have lived in the streaming-sphere for some time now and her new additions is the soulful, organic, soft instrumentation and mixing of slower tunes with more upbeat ones, creating a definite flow.

This also allowed Shawn to experiment with outside producers, like Britten Newbill who worked alongside D'Mile on the new single “SUPERFINE” and Colin Monroe who produced album closer “TO CHANGE MY MIND.” Both are sultry numbers, with the latter being a poetically sexy invitation for vulnerability, and the former a mid-tempo, bold assertion of bouncing back and choosing oneself first. In the video for “SUPERFINE,” India takes a solo drive to clear her thoughts and emphasize the point that at the end of the day, being solo is OK sometimes.

Perhaps another standout is the fact that Shawn’s guests are utilized for the different facets of their artistry that they are known for, exemplified by Anderson .Paak and 6LACK both rapping and singing on their appearances (on “MOVIN’ ON” and “NOT TOO DEEP,” respectively), instead of just doing one or the other. India Shawn clearly plays muse and headliner here.

Whether through mellow poetic songs or sharp-tongued bouncy numbers, BEFORE WE GO is two parts "I should’ve known" and one part "OK, maybe just this once," and India Shawn manages to give listeners different shades of caution while remaining open to possibility. In a statement on her IG she notes, “I wanted you to experience these songs as I imagined them, as a body, a collection that you can ride to or dance to or cry to; something you can live with.” With a voice that is as strong as it is soft, India Shawn’s Epic Records debut positions her to reach a wider audience and become a mainstream name that we can't live without.


TAGS:  6lack, Anderson Paak, audio, D'mile, India Shawn
Previous: John Legend Jingles All The Way To The Mall On ‘You Deserve It All’ Next: Joss Stone Gives Us Something To Remember With ‘Never Forget My Love’