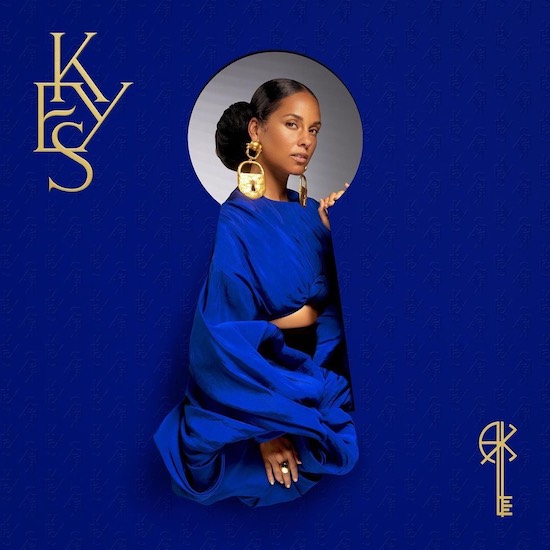 On the double album KEYS, released just shy of one year after her last album ALICIA (and a project that could be considered a loose sequel given its title), Alicia Keys reminds everyone where she comes from, where she has gone and hints at where she’s going. This time, she collaborated with producer Mike WiLL Made-It for a deluxe offering (on disc 2) to show how playfully creative she can be at this point in her career. In other words, she wants her spot back, but she doesn’t need it.

Delivering a collection of new songs that touch on vibes from almost every corner of her discography so far, KEYS is a double-LP audio lookbook of all the pieces that comprise a true Alicia Keys season. (A season that usually starts in the fourth quarter of the year.)

The first album, all produced by Alicia – with help from the omnipresent Raphael Saadiq and composition credit from the likes of Sia, Natalie Hembly, AraabMuzik, Fred Ball and, of course, her husband Swizz Beatz, features songs dubbed as “Originals.” The second album can be considered a remix album, with alternate “Unlocked” versions of each song produced by Mike WiLL with the exception of “Dead End Road (Unlocked)” (remixed by Jay Mooncie) and “Billions (Unlocked)” (remixed by Suzy Schinn and Vron). The second set also gives us two songs not featured on the first: The alluring single “LALA (Unlocked)” featuring Swae Lee and “Come For Me” featuring Khalid and Lucky Daye.

She leads off with a nod to the New York City and B-girl sensibilities she grew up with on the track “Plentiful” alongside Pusha T over a sample of Beanie Sigel’s “The Truth” (originally produced by Kanye West, which itself samples “Chicago” by Graham Nash). This is a throwback to her days of sampling famous Ol' Dirty Bastard and Notorious B.I.G. songs on her first album. Other familiar feels that make this album a trip through Alicia’s industry life include blues piano-inspired songs like “Old Memories” that conjure the feeling of her second album while she revisits the pop style that she’s been tagged with ever since her third album with the pretty “Daffodils.”

Alicia’s homages continue on two early tracks where you’ll find the most recognizable R&B soul sounds. On the irresistible head-nodder “Skydive”, which borrows its drums from the Taana Gardner hit “Heartbeat” and a bass line from the Sly and the Family Stone classic “If You Want Me To Stay,” she gives a nod to reggae legend Tenor Saw’s “Ring The Alarm” on the hook melody and Mary J. Blige’s “Love No Limit (Remix)” with the intro melody for the second verse. On the single “Best Of Me,” she channels Sade’s “Cherish The Day” almost to a tee, in a way that you can tell met the approval of Ms. Adu and sounds like an extension of the original, instead of a cheap imitation or remake. Both songs bring a freshness to song styles that we haven’t heard in a long time. Another Sade homage can be inferred from the piano ballad “Is It Insane.” Or it could just be a flex from Alicia's classically-trained background, a bag she jumps in and out of frequently on this album more than ever before.

And that may be the understated jewel of this project: Alicia Keys reemerges with a greater control and command of her vocal tone than she’s showcased on any other album in her catalog. Gone is the endearing scratchiness heard on past songs like “No One” and “A Woman’s Worth” or the broken notes infamously characterizing “Un-thinkable (I’m Ready).” Here we hear her hitting notes we’ve never heard her hit, beautifully bobbing and weaving in and out of harmonies and crescendos, adding jazzy scat riffs and ad libs and landing graceful notes like a pilot on the piano.

Slower songs like “Dead End Road” and the Brandi Carlile-assisted “Paper Flowers” allow this range to be highlighted. Both signify her vocal dexterity as clear as day, but it’s on the tracks “Love When You Call My Name” and “Only You” where a glimpse of the future direction of Alicia Keys is present and might evoke the most emotion just from the sound of her voice blending with the ivories. On these four songs, she also is at her linguistic best, with lyrics describing acceptance, as well as the undying will of love in the face of rough times. It's a theme that carries on throughout the project.

Even when she takes it down a notch to have fun with the newer wave, like on “Billions” or on her collabs, instead of seeming like an older artist trying to keep up with the trend, she invites these artists and styles to her side, creating something in the middle. For instance, “LALA (Unlocked)” pushes Swae Lee to be a bit more grown than he’s ever had to be on a single, while still being himself and professing his love for “zaza.” Alicia is not afraid to experiment either, such as on the track “Nat King Cole” where she goes full James Bond soundtrack jazz queen while Mike WiLL Made-It crafts the perfect theatric spectacle that brings Portishead to mind, and the "Unlocked" version featuring Lil Wayne makes it all make sense.

Mike WiLL Made-It’s contributions outside of these are mostly basic, either adding slight changes in drum and bass arrangements or creating dance/house music alternates to songs like “Only You” and “Old Memories,” for example. Whether listeners gravitate to the "Originals" or "Unlocked" versions will just have to come down to a matter of preference.

That's the beauty of KEYS. Regardless of when you became a fan – even if that fandom has waned over the years – Alicia Keys has something for everyone on her latest project, which at its core is all about the power and beauty of love. Released 20 years after making a splash in 2001 with her debut Songs In A Minor, on this double album she’s reminding while climbing. She’s giving heart, but mostly, she’s giving soul.